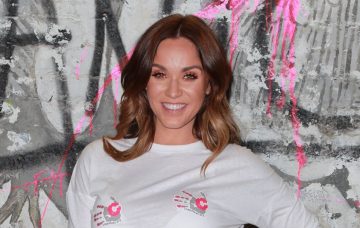 She's never afraid to be candid, is she?

And now she’s said starting a family is another thing on the back burner.

The former Geordie Shore star told the new issue of Closer magazine that although John is itching to have kids, she’s not quite ready to become a mum.

And she candidly cited not wanting to give up booze or her flat tum as reasons.

Vicky, 30, said: “John is really broody but then again it’s me that has to make the sacrifice. I’d have to give up my lifestyle and everything to have one.

“I’m not ready to give up Prosecco and my body yet – so not any time soon.”

It’s not the first time Vicky has been vocal about children and motherhood.

She once told Daily Star: “I love (John) and his company. But I’m not prepared to carry something for nine months which would then ruin my body, steal my career and destroy my vagina.”

But after they became engaged, she admitted to OK! magazine that she’d changed her mind on being a mum.

“I always said I didn’t want children but being with John has totally changed my mind.

“We recently made the decision that children are very much part of our future.”

“I’ve come to realise that life would be quite empty without them.”

The former I’m A Celebrity winner has postponed her nuptials until 2019, after she and John decided to take things slowly when it comes to planning.

Speaking to the Daily Star last week, she said: “We’ve been so stressed building our dream house and I haven’t been able to dedicate enough time to the wedding as well.

“I don’t want to rush it and to be honest I don’t think I’m ready to be a wife yet.”

Vicky and John got engaged in July last year, after he popped the question during a country walk with his dog, Roxie.

It was a total surprise for Vicky who later admitted she’d burst into tears when John dropped to one knee as she was on the ground playing with Roxie.

John designed the 3.6 carat ring himself.

Vicky and John first met nearly a decade ago after being introduced at a mutual friend’s party, but reconnected in 2016 after a chance meeting on a train.

She told Lorraine last year: “I struggled with my personal life and finding someone who was supportive of my career and successful in their own right as well.

“Finally I have that with John. He’s lovely and caring and strong.