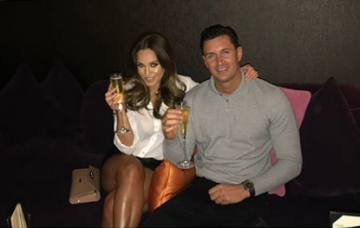 She’s always been known for her very honest opinions, but Vicky Pattison has had to be completely transparent about her forthcoming nuptials.

The reality TV star has postponed her wedding next year to fiancé John Noble, but don’t worry, it doesn’t mean she’s finishing things with the businessman.

According to the former I’m A Celebrity winner, she’s had so much on her plate and realised that she isn’t ready to be a wife just yet.

The 30 year old got engaged to John last July and the couple had been busy planning their wedding.

But things haven’t quite gone to plan, and the star needs a bit of time out.

Read more: Kym Marsh reveals ALL about that confusing Tweet

She told the Daily Star:

“We’ve been so stressed building our dream house and I haven’t been able to dedicate enough time to the wedding as well.”

“I don’t want to rush it and to be honest I don’t think I’m ready to be a wife yet.”

The former Geordie Shore legend moved back to her native Newcastle to be with her fiancé and revealed that her hubby-to-be had no problems waiting to get hitched.

Read more: Which Dancing On Ice stars have been told to stay apart on this weekend’s show

Vicky has opened up in the past about her relationship with John to TV host Lorraine Kelly.

She said: “He’s lovely. I struggled with my personal life and finding someone who was supportive of my career and successful in their own right as well.”

“Finally I have that with John. He’s lovely and caring and strong. I’ve finally got a man not a fan.”

And with a love like that, who needs to rush into things?