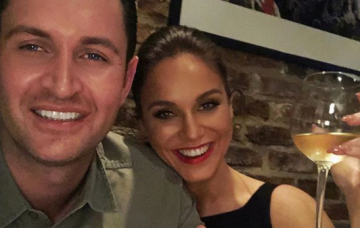 She'll get by with a little help from her friends!

Planning a wedding can be one of the most stressful things in life. From the guest list to the dress, every bride wants to ensure they’ll have the perfect day they’ve always dreamed of.

Vicky Pattison is no different, and as the reality TV star plans her wedding to businessman John Noble, she’s leaving no stone unturned in her quest to ensure everything is just right.

Now she’s admitted she’s not afraid to cash in on her celebrity connections so she can have a showstopper of a wedding cake, and a first dance serenaded by an award-winning singer.

She told The Sun: “I’ve already been asking Simon Rimmer if he’ll do my cake. But I feel like I’m a bit cheeky when it comes to this. Everyone I meet I try to rope into doing something.

“Last year I asked Olly (Murs) to sing, this year I was trying to get Craig David…”

She added that she has a back-up plan if the Sunday Brunch chef can’t make her cake, as she can ask Bake Off champ Candice Brown instead!

She joked: “I’m shameless. I’m fond of making the most of my celebrity connections.”

We’d do exactly the same in your shoes, Vicky!

When it comes to choosing her perfect dress, she’s also enlisted some expert help in the form of David Emanuel, who famously designed Princess Diana’s gown when she married Prince Charles.

Vicky’s set to appear on the fellow I’m A Celeb veteran’s TLC show Say Yes To The Dress, where he’ll advise her on what to wear.

The former Queen of the Jungle still has plenty of time to make her mind up about all the finer details as she’s postponed her nuptials till 2019.

The 30-year-old recently revealed on The Wright Stuff that the couple made the decision to prolong their engagement because it wasn’t going to be possible to get everything organised for this summer as originally intended.

She said: “Let me tell you straight now, from the horse’s mouth, me and John got engaged last summer and, of course, I was so overwhelmed and thrilled you think, ‘I’m going to get married next summer.’

“But the practicalities of that… it’s just very difficult to plan it in a year.

“I have some great things coming my way work-wise and my sister is actually getting married this year and I didn’t want to steal or rain on her parade. So the wedding has been pushed back until next summer, 2019.”

Good luck with the planning, Vicky! We’re sure it’ll be an amazing day.

Which celebrity would you like to sing at your wedding? Leave us a comment on our Facebook page @EntertainmentDailyFix and let us know what you think!