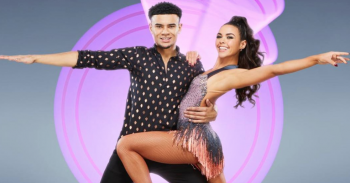 Insiders claimed the pair had a brief affair

Dancing On Ice star has denied reports that she and her celebrity skating partner Wes Nelson had a fling in the early days of the show.

The Sun claims that the pair—who are favourites to win the skating competition—had an instant connection as the show kicked off, but that their romance didn’t last.

“They had a thing at the start of the competition,” The Sun’s insider source alleges.

“Wes and Vanessa were instantly attracted to each other, you only had to be in the same room as them for a minute to see sparks were flying.”

But the source claimed the relationship was short-lived, with Wes deciding he didn’t want to commit to a relationship.

“Girls are queuing up to knock on his door,” the source said. “The last thing he needs is a serious relationship. Vanessa has come to accept it.”

The chemistry between the two was said to be a factor in the end of Wes’ relationship with Love Island co-star Megan Barton Hanson partway through the series.

Megan was said to be jealous of Vanessa as the competition progressed—and is reportedly not surprised by the reports.

Sources close to her have said she’s seen the reports and is moving on, telling the Daily Mail that she’s “getting on with her life”.

“Megan has always maintained her love for Wes but clearly there were suspicions from the very start about Wes and Vanessa’s relationship, ultimately leading to the breakdown in Megan and Wes’ relationship,” the source said.

“She’s gutted to hear these rumours but she’s not surprised, equally she’s getting on with her life, enjoying being single and focusing on her work”

But while Vanessa is preparing for the final show, she took a moment to refute the rumours, dismissing them as “a lie.”

She posted a shot to Instagram Stories, saying “So before this becomes a thing, literally everything about this is a lie.”

Reps for Vanessa also denied the story, saying that it was detracting from Vanessa’s preparations for tonight’s performance.

“I’m sorry but this story is categorically false and as it is the day of the final, we would appreciate if Vanessa could be left in peace to prepare to the best of her ability,” they said.

Wes is yet to address the rumours choosing to instead focus on his preparations for the Dancing On Ice finale tonight—where he’ll be skating despite dislocating his wrist during practice.

He shared a shot of himself and Vanessa after finishing a practice run earlier today, urging fans to tune in to the show.

Entertainment Daily has contacted reps for Wes for comment on this story.

Do you think they had a fling? Leave us a comment on our Facebook page @EntertainmentDailyFix and let us know what you think.