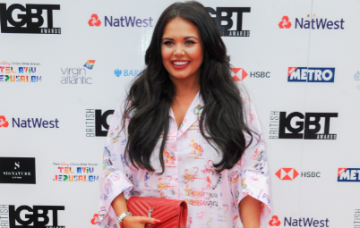 Gogglebox star said she felt compelled to speak out

Megan Barton Hanson hasn’t been winning too many fans thanks to her “muggy” behaviour on Love Island, but she has found a famous supporter in Scarlett Moffatt.

The Streetmate presenter has leapt to the defence of the model on Twitter after people have been trolling her over her past appearance.

“I’ve got to speak out!!” Scarlett wrote on Twitter this week.

“Megan looks beautiful before and after surgery, it’s horrendous comments like the ones I’ve seen on social media that drive women to feel like they’re not good enough and making them feel like they need to change themselves! Stop this bullying! #loveisland.”

Scarlett’s comments came in response to pictures that have been shared on social media mocking how Megan, 24, looked when she was younger.

People have called her “ugly” and unrecognisable from the beauty in the Majorcan villa.

Read more: Love Island’s Adam and Zara reunite – but is there a “storm brewing” between them?

Her new look is reportedly thanks to her having spent around £25,000 on surgery, including lip fillers, a nose job and having her ears pinned back.

Some of Scarlett’s followers replied to her message to praise her for defending the reality star.

“You are so right – it is so hard to handle comments like that,” one wrote.

“YAAAAAAAAS QUEEN! All about this! I stupidly thought it would change after everything that happened with Sophie! Us girls need to have each other’s backs. You might not like her behaviour but people need to remember she’s a person too!” said another.

“Well said Scarlett. It is time that people stopped this constant stream of negativity about young women,” wrote a third.

However, others said Megan had opened herself up to criticism by going on the hit ITV2 show, adding that her conduct had made people dislike her regardless of her looks.

In recent episodes, viewers have seen her break-up Wes Nelson and Laura Anderson after she told him she fancied him, only to then dump him to recouple with Alex Miller. She’s now back with Wes after her new beau was dumped from the villa on Thursday – and has fallen out with Laura again calling her an expletive.

One fan said to Scarlett of Megan’s behaviour: “I just feel like after the way she’s acting she doesn’t really deserve the sympathy I agree she is beautiful before and after but she’s an ugly person on the inside and that changes the way I look at her in general.”

To this Scarlett replied: “But we don’t need to write horrible things on social media, our health is our wealth and that includes mental health. These tweets and insta posts really affect people.”

It’s something the 28-year-old  Gogglebox star knows too well herself.

She’s regularly trolled about her appearance when she shares pictures on her Instagram account, and has had to deny accusations she’s had a nose job.

Also this week, Scarlett has been hit with rumours that she’s split (again) from boyfriend Lee Wilkinson.

Are people being too cruel to Megan? Leave us a comment on our Facebook page @EntertainmentDailyFix and let us know what you think!