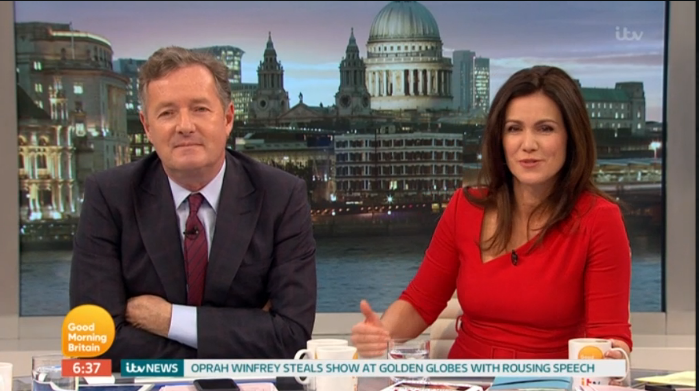 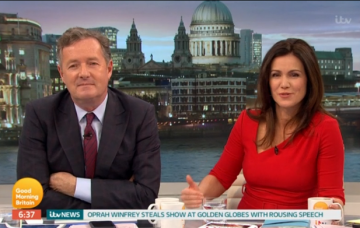 He was suffering from gastroenteritis

By Lucy Waterlow
8 Jan 2018, 07:02
Tags: Piers Morgan, Susanna Reid
Piers Morgan returned to co-host Good Morning Britain today after his festive break – but he wasn’t on top form due to a suffering from a bout of gastroenteritis.

The former newspaper editor tweeted fans last night to warn them that he was feeling unwell, leading some to fear he might need more time off.

He wrote: “So, 16 hours before I’m due back on GMB & I have a raging fever & rather acute.. ahem… ‘stomach-related issues’. Could make for some rather interesting live TV. Can you bring a bucket @susannareid100?”

He wasn’t joking about the latter and when viewers tuned in today to find he had made it into work, Piers revealed he had a bucket behind the desk in the studio. 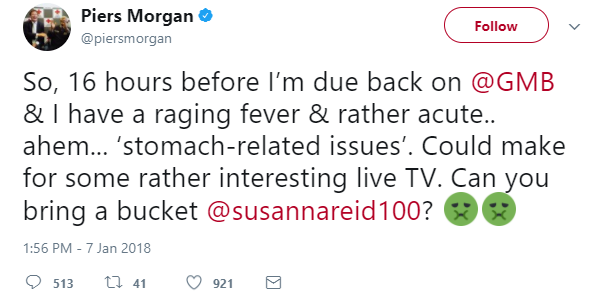 “It’s there just in case and trust me, that may be needed,” he said. Ewww!

Of course, the outspoken presenter didn’t quietly get on with his job this morning while nursing his dodgy tummy and was keen for everyone to know he had “manned up” to be there, using his illness as a chance to make a dig at the England cricket team.

“Unlike the England captain who couldn’t play yesterday due to gastroenteritis, I have returned to my work station,” he said.

On a video clip his co-presenter Kate Garraway shared on her Instagram, he moaned he felt “rough as a badger’s backside” adding: “I don’t want to give to much info but acute gastroenteritis for three days.”

Kate captioned her video with the comment: “And Piers Morgan is back – not in the greatest state! It’s going to be bumpy!” 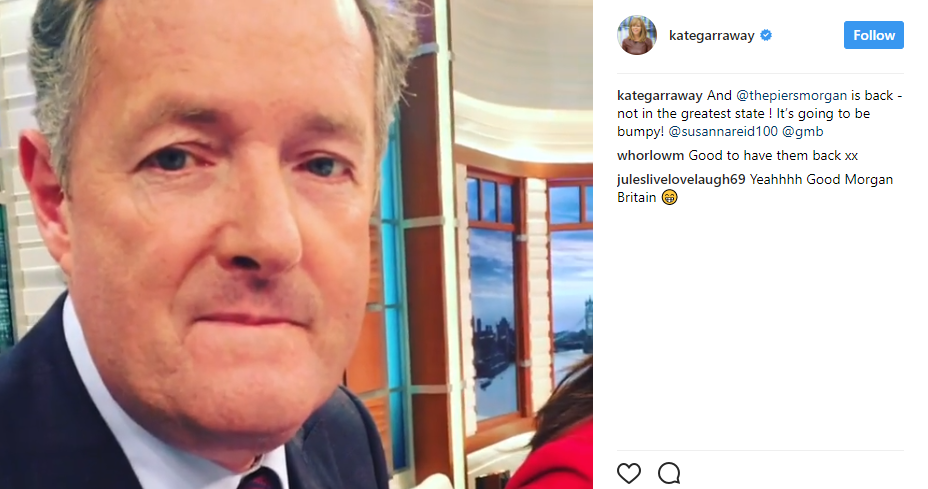 She then groaned on TV as Piers went into more detail about how he had been feeling, while Susanna Reid told him he couldn’t compare himself to the cricketer missing work since his job was not physical.

“All you have to do is sit behind a desk,” she told him.

Some of Piers fan were delighted he had soldiered on to return to work, saying they had missed him and were glad he was back.

However, others felt he should have stayed at home to avoid spreading his germs.

One wrote: “If you have ‘active D&V’ or have been symptomatic in past 48 hours you should be at home or risk spreading it.”

Another said: “Don’t pass it on to the whole studio, yuckie.”

Piers later tweeted to say he was glad he’d made it, sharing a picture of himself with Susanna held his sick bucket.

He wrote: “England stuffed 4-0 in the Ashes…Arsenal humiliated in the FA Cup… and my gastroenteritis still raging… it’s enough to make a man  – but hey, it’s great to be back at work. Happy Monday everyone!” 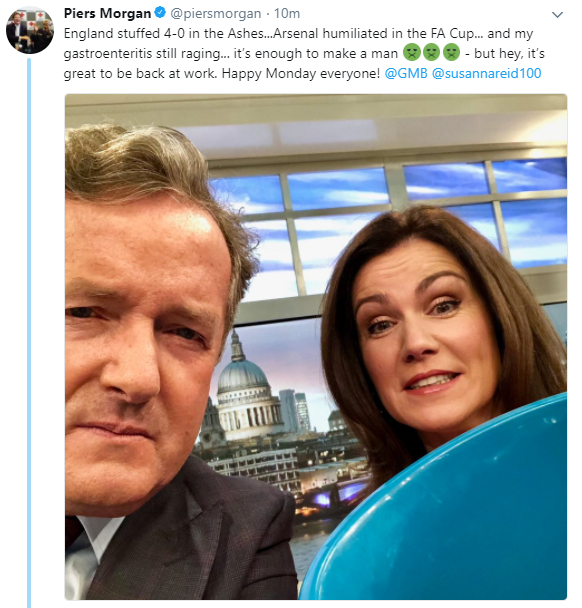 We’re glad he’s back too as he does make the live show more interesting – although it probably would have been better if he hadn’t talked quite so much about his symptoms today while people were having their breakfast!