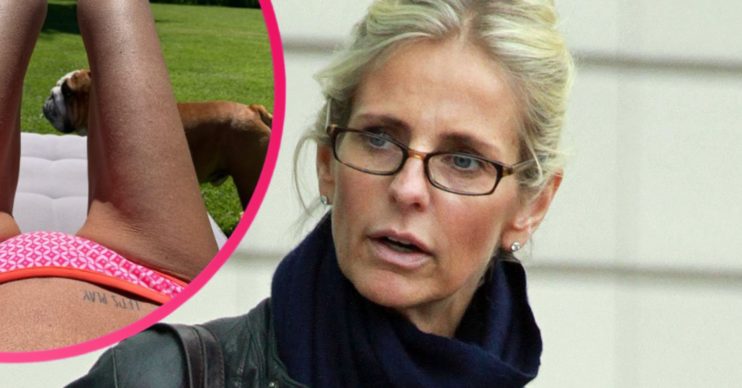 The TV star, 53, soaked up the sun in her back garden as high temperatures covered most of the UK.

In a snap on Instagram, Ulrika showed off her tanned legs.

In the picture, her pet pooch Leo also appeared to be enjoying the weather.

She captioned the post: “Sundowner with my main man #Leo.”

In another snap, Ulrika showed off her physique after changing into a new bikini and posing in front of her mirror.

She wrote: “A taste of Ursula Andress?”

Ulrika regularly shows off her figure on social media.

However, lately, some fans have expressed their concern over her weight.

In response to a selfie last month, a fan said: “Hope you’re well. How exciting,” said the follower.

“I just wanted to say you look so very slim and wanted to know if you are OK.

“You are a beautiful and amazing woman, but just thought how thin you are.”

Ulrika decided to respond, and confessed that she has been trying to gain weight recently.

She explained: “I am a bit thin but trying to put weight on. I don’t have an eating disorder but I think the constant commenting on women’s size is unhelpful. I spend my life cooking, eating and feeding.

Ulrika went on to insist that remarks about her weight from trolls were “unhelpful”.

“I’m trying to put on weight, just not nice to hear unhelpful comments but I see where you are coming from. Sending you lots of love,” she added.

It wasn’t the first time Ulrika’s weight has been the topic of conversation, however.

Back in 2011, the TV personality was forced to hit out at claims she had an eating disorder.

She had dropped to just seven-and-a-half-stone at the time.

However, she revealed that a painful degenerative disc disease was the catalyst for her drop in weight.