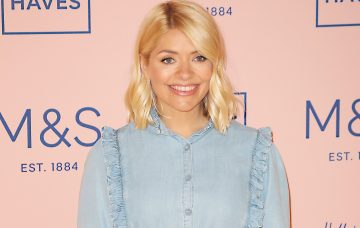 Holly Willoughby hosted the glitzy bash for the MSC Bellissima with cinematic icon Sophia Loren also on hand for the liner’s christening in Southampton.

However, a quayside marquee was reportedly rocked by gales leading to event organisers deciding to shift the formalities on board.

Other stars in attendance according to The Mirror included classical tenors Andrea and Matteo Bocelli, who sang for guests before the ceremony was changed up.

The Bellissima is believed to be the sixth largest in the world and can accommodate 5,686 guests across 19 decks. It includes 12 restaurants and a 985-seat theatre on board.

A MSC Cruises spokeswoman is reported to have said: “On the evening of March 2, while we were in the middle of the naming ceremony of MSC Bellissima in Southampton, UK, worsening weather conditions required us to conclude the ceremony inside the ship.

“This decision was taken in the interest of safety for all our guests and employees.

“The traditional breaking of the bottle was completed in the presence of the ship’s Godmother, Sophia Loren, with all guests watching from the ship.

“While it’s never fun to interrupt a party, we made sure this festive moment was continued in all its beauty, glitter and with all our great guests participating inside the ship. And a party it was.”

#StormFreya will bring very #windy weather to the UK on Sunday and into Monday. Stay #weatheraware pic.twitter.com/p0lIlOEyRQ

Weather experts have warned people to stay at home to avoid “dangerous” 500-mile-wide winds as Storm Freya moves in across Britain this week.

“Hefty rain” is also expected in upcoming days, with a “yellow” warning and wind alert in place across England and Wales.