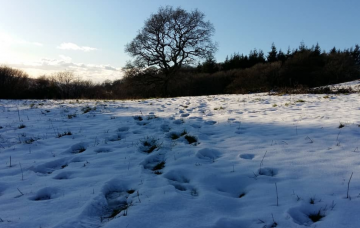 High winds have caused havoc at Heathrow, too

Snow, rain and wind are set to continue to batter the UK this weekend as Storm Erik rages on through Saturday.

Winds of up to 70mph are predicted for across the country, with the North of England set to be hit particularly hard.

The Met Office has also issued flood and wind warnings for the weekend.

However, it is thought the storm will largely clear on Sunday with conditions becoming more settled as the week progresses – but there could still be outbreaks of rain.

The #weather is set to turn more settled this week, here is the latest…. pic.twitter.com/dqCK7zh4KC

The storm has already caused high wind speeds across the country, with wind reaching 84mph in parts of Wales yesterday.

The high winds have affected air travel, with one British Airways flight failing to land at Heathrow amid the gales.

The flight attempted to touch down on the runway, with the pilot fighting for control before electing to take off again rather than risk the landing.

The plane circled the airport before making a second attempt – which was successful.

It is also believed that two deaths have been caused by the storm so far – both of which occurred when the weather affected driving conditions.

In Wales a falling tree collided with a van, killing the driver. A similar incident also occurred in Devon, with a heavy tree crushing an Alfa Romeo and killing the man inside it.

A tree also hit a double decker bus in Dorset yesterday, but the passengers and driver escaped unscathed.

The Met Office has put a weather warning for wind in place covering most of the UK, with strong winds expecting in the south of Scotland, much of England, and Northern Ireland.

The #UK will have a day of sunny spells and #showers today, the showers will be rather blustery at times too! So hold tight to your brolly… ⛅️🌦️⛅️☂️☂️ pic.twitter.com/urOM4yrJ31

Meteorologist Alex Burkill warned that the weather could cause further issues on roads.

“It’s going to be another very windy one, particularly across northern England, Northern Ireland, southern Scotland and northern Wales,” he said.

“They’re going to have very strong winds.We could therefore see some further problems on roads.”

Parts of the country could also experience hail and thunder.

While much of the country will be beset by wind and rain, snow expected too – particularly in hilly areas.

However, the snow is expected to clear on Sunday, with a few blustery showers following it.

Are you prepared for the bad weather? Leave us a comment on our Facebook page @EntertainmentDailyFix and let us know.