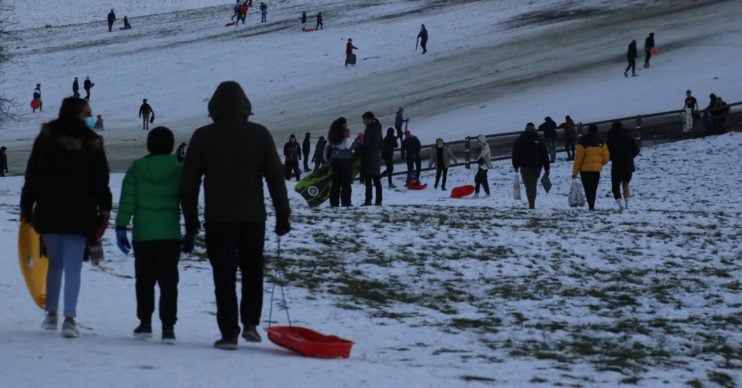 The Met Office says it's time to wrap up warm!

The UK weather forecast is up to its old tricks again following one of the chilliest May Bank Holidays on-record.

Snow is currently expected to cover parts of England and Scotland next week.

The north-west is expected to be worst hit, and could  receive between 1cm and 2cm of snow.

Despite May being recognised as the beginning of summer by many, the Met Office says snow is not entirely unusual.

What is the UK weather forecast for next week?

It said: “Remaining unsettled with spells of rain, locally heavy, especially across northern hills and in the far southeast at first.

“Showers in the north accompanied with the risk of hail and thunder.

“Winds fresh to strong across much of the UK, potential for gales at first in the south and east, becoming confined to the northwest later.

“Temperatures nearer average, with a chance of warmer conditions in the SE.

“Further spells of rain, showers and fresh winds mainly for the north, with some hill snow in the far north through early next week.

“After that, remaining unsettled for the rest of the period with showers, longer spells of rain and strong winds, with temperatures likely to dip back below average, or remain close to.”

Paul Michaelwaite from Net Weather warned that those in the south may not be able to escape a covering of snow.

“The cold air could move down the UK from the north during the week, bringing snow and freezing temperatures along the way,” he told Express.

It may be #May, however it still looks like #winter this morning across some of the Scottish mountains ❄️

Further #snow showers will fall across northern hills and mountains during the next few days https://t.co/ZTN4UFINO2

Wind ravages much of UK

It’s been a rough month for UK residents so far.

Strong winds have already wreaked havoc in many regions, with gusts peaking at 76mph at Capel Curig in Wales on Monday (May 3).

Hundreds of properties in Wales also suffered power outages due to the adverse weather.

Bridges were later closed, trees were blown down and many homes were also left damaged.

Read more: Brits divided as pubs are urged by breweries to ‘sneak up prices’ as they open post-lockdown

The bank holiday weekend weather dropped due to cold weather coming in from the west.

April 2021 recorded the lowest average minimum temperatures in the UK since 1922. Levels of frost were also recorded at the highest level in 60 years.

Whilst there have been some sunshine spells recently, April showers have been much more common in the past four weeks.