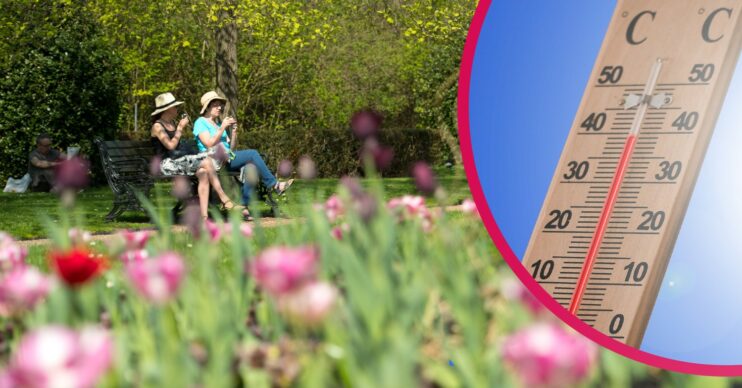 A warm Easter weekend is just what we need!

The UK weather report is in and we’re set to bask in some glorious sunshine tomorrow (Friday, April 15) as the country is going to be hit by a heatwave.

Experts are forecasting temperatures as high as 2˚2C degrees as a Saharan plume is set to arrive.

The Easter weekend is going to be off to a good start tomorrow, with a promise of a spring heatwave.

The warm UK weather is coming courtesy of a plume of balmy air that’s coming straight from the Sahara.

The plume in question also caused a weird meteorological phenomenon.

The sky reportedly turned red as the desert sand was carried up into the atmosphere.

People living in the south and east will also have noticed orange sediment on their windows and cars, caused by the sand.

And tomorrow forecasters believe that the Saharan plume will cause the temperature in the UK to rocket up to 22˚C!

Forecasters went into more detail about what Brits can expect from the weather tomorrow.

Annie Shuttleworth, a meteorologist for the Met Office, said it will be the east of England that sees the best of the weather in the next few days.

If things play out, we could be looking at 20˚C or 21˚C in the south over Easter.

“I think in the main for the bank holiday weekend, we’ll see temperatures quite widely above average across the UK,” she said.

“Hopefully they could be very warm in the south-east in particular,” she continued.

Despite it being hotter than this time of year, Annie says that it will be “nowhere near heatwave criteria”.

“However, it’ll definitely be warmer than the week we’ve just had and last week,” she added.

Jim Dale, a meteorologist for British weather services, said that the “trend is for temperatures to rise”.

However, it’s not all good news. Hayfever suffers are being warned to take care, as the pollen count is then going to soar this weekend.

“The start of the tree pollen season has been slow, with the poor weather so far most of this spring,” Max Wiseberg, an airborne allergens expert, said.

“But it looks as if the season could start in earnest with high pollen counts forecast across the south and east of England on Monday (April 18).