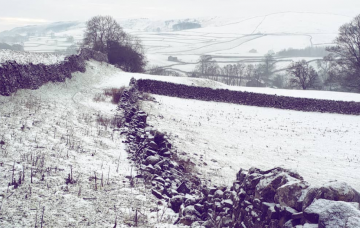 Brace yourselves for plenty of snow

The UK is set to be hit by a huge storm later today – with cold weather and heavy snowfall predicted to only get worse as the week goes on.

The Met Office has issued a yellow warning for wind, across the north east of England and moving south over the course of the day.

Wind speeds are expected to reach as high as 60 mph inland, rising to 70 mph in coastal areas.

Meteorologist Becky Mitchell warned that winds could reach gale-force levels in some places.

“There will be some very strong winds associated with [the low pressure system] on Sunday morning, these could reach gale-force,” she said.

“There will be a risk of snow showers in the north with much of the UK turning unsettled as the low passes across the country.”

The bad weather is set to continue into the week, with strong warnings for snow on Tuesday and Wednesday.

It is believed a huge snow cloud currently sweeping across the Atlantic will bring heavy snowfall and freezing temperatures along with it.

The Met Office has also issued a “danger to life” warning that some rural areas are at risk of being cut off as more snow falls in the middle of next week.

Meanwhile, BBC meteorologist Alina Jenkins predicts that there will be plenty more storms in the coming days, even if the winds might die down a little

“By the time we get to Monday the winds won’t be as strong but if we stay in the cold air, you can see plenty more wintry showers waiting in the wings,” she said.

She went on to say that the cold weather could lead to snowfall almost anywhere across the country on Tuesday.

The inclement weather comes after snow last week caused an increase in traffic accidents, as drivers dealt with ice on the roads.

Are you prepared for the cold weather? Leave us a comment on our Facebook page @EntertainmentDailyFix and let us know what you think!