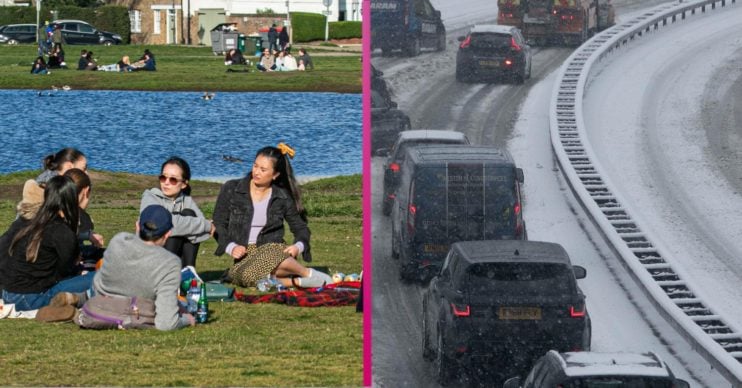 The sunny bank holiday weather will quickly become a distant memory for those living in the UK.

Unfortunately, heavy snow and temperatures reaching -7C are set to move across the country from today (April 5).

While Friday, Saturday and Sunday saw sunshine across much of the UK, sadly it won’t last.

And, with temperatures dipping noticeably today, things look set to get chillier – and a lot whiter!

Easter Monday sees the start of a weather turn as bitterly cold winds move across the UK.

Read more: UK weather: Highs of 24C before rain, sleet, snow and hail wash in for the bank holiday weekend

Forecaster are even predicting heavy snow in some areas.

Scotland has been noted as one area that will see sub-zero temperatures that are then expected to travel southward.

The bank holiday weekend brought glorious sunshine and even saw record temperatures in some areas.

There’ll be a drop of 11 degrees between one day and the next, so you will definitely notice it!

Yet the town is expected to see temperatures of 7C (44.6F) on Monday – an 11C fall which will feel bitterly cold.

Colder temperatures are expected to be felt across the UK.

Starting across Northern England, snow has already been predicted to fall. Furthermore, in Northern Scotland, there are already snow warnings in place, with nearly 6in falling in higher areas.

What did the Met Office say?

Met Office forecaster Simon Partridge said: “There’ll be a drop of 11 degrees between one day and the next, so you will definitely notice it!”

The main reason for the chilly change is down to a change in wind temperature.

He continued: “The air we had on Sunday came in from the south so it’s pretty mild having come off the continent.

“That will introduce much, much colder air across the whole country.”

There will be some cold, frosty and wintry weather this week.
Here are the details: pic.twitter.com/Ixamvko9WS

What does the UK weather look like for the rest of the week?

While the sunny bank holiday weather has seemingly disappeared, the rest of the week isn’t a total loss, with small bouts of sunshine breaking through.

Tuesday will still be a cold and wintry day with sunny spells. However, some areas including Scotland will see scattered snow and hail showers.

Frost is expected from Wednesday, but with sunshine spells expected. Cloud and rain showers will fall in the north, but are expected to move southwards by the end of the week.

What does the weather look like near you? Leave us a comment on our Facebook page @EntertainmentDailyFix and let us know what you think of this story.