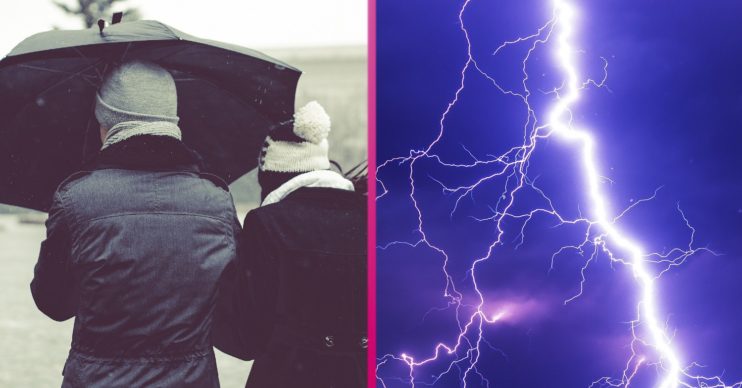 Isn't it supposed to be summer?

The UK is braced for a chilly and wet Bank Holiday weekend that could ruin families’ plans for staycations, according to weather experts.

Weather between Friday (August 28) and Monday (August 31) is set to bring a mix of sunshine and heavy, thundery showers – with temperatures potentially dipping to their lowest in 40 years.

What has the Met Office said about the Bank Holiday weekend weather?

According to Met Office data, tomorrow will see rain edge across northern England.

The weather service currently has a yellow warning in place across the whole of the south of England, the Midlands and southern Wales.

Thunderstorms and heavy showers, it warns, could bring severe disruption to transport services in the affected areas.

Heavy rain continues to swing eastwards and northwards across the south of the UK.

Several sites in the Southwest have seen around 40 mm of rain in 6 hours, with much of that falling in two hours or less.

The average for August in Cornwall is 81mm!

Between Saturday and Monday, the Met Office says, cold winds will lash the southeast of England. Other parts of the country will see a chilly start develop into sunny spells.

However, parts of Scotland and the north of England could see frost, according to Weather Outlook.

Forecaster Brian Gaze said, as The Sun reported: “[Forecasters expect] Bank Holiday weekend frost […] in Scotland and [it is] possible in England’s North, which is more bad news for the many families on staycation.”

The newspaper reported that average daytime temperatures for the weekend could hover around 10C in parts; the last time it was so low during the summer Bank Holiday was in 1979, when the lowest daily maximum was 10.1C in Shetland.

More bad news for the many families on staycation.

Marco Petagna, a forecaster with the Met Office, said: “After low pressure with rain and wind to end the week, it will be cooler for the Bank Holiday weekend.”

Flood warnings in place for England

Elsewhere, the Environment Agency had a number of flood alerts in place as of Thursday (August 27) afternoon. It is urging Brits make prepare accordingly.

Warnings were in place in the southwest, including for Weymouth and West Cornwall rivers. And also in the north, including at the River Dee catchment from Whitchurch to Chester.

What do you have planned for the Bank Holiday weekend? Leave us a comment on our Facebook page @EntertainmentDailyFix and let us know.