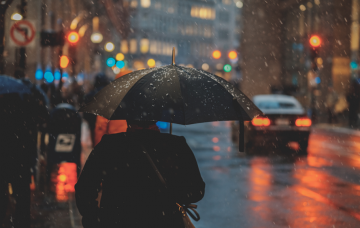 More than 70 flood warnings were issued across Britain today – with the south west of England hit worst by recent torrential wind and rain.

Around 40 weather alerts were made for the region and another four were also in place for both Scotland and Wales just a couple of days ahead of expected heavy traffic as people set out to travel to visit families over Christmas.

Following frequent showers the afternoon for areas in the west, further rain will continue tonight for most of Wales, Northern Ireland, west England and south Scotland.

Thunder is also expected in places as heavier rain moves in.

However, the outlook for Thursday is a little brighter with sunny intervals – although showers are still forecast.

There will be mostly cloudy weather in north west England, with intermittent showers combining as longer spells of wet weather.

It is believed the eastern side of the country will be dry for most of Thursday.

Friday is expected to be cloudy with outbreaks of rain in the north. It is anticipated strong winds will accompany sunny periods in the south.

More blustery showers on the way for the journey home this evening. Many eastern areas staying dry though 🌧️🌛🚗🚶‍♀️ pic.twitter.com/h5kpMkyQnD

Read more: Katie Price given court date after being charged with driving offence

There will be a bright start to Saturday, although it will cloud over later in the day.

Scattered showers in the south and west are also likely.

And more rain is expected for Sunday – apart from in north Scotland.

Traffic analysis from Inrix and the RAC indicates Thursday and Friday will be the most packed days on the roads, with around 3 million travelling as part of the Christmas getaway.

How is the weather looking where you are? Leave us a comment on our Facebook page @EntertainmentDailyFix and let us know!