A 'Scandinavian shiver' is set to hit the UK this week as sub-zero temperatures arrive.

It's been said that Britain could experience the coldest November in nine years as temperatures are predicted to plunge to -4C in some parts of the country from tomorrow (November 5).

There's also suggestions that snow could fall over hills of Scotland on Thursday (November 7).

Do you like cold weather in autumn or enjoy something a little milder? 🌡️

It's set to turn colder for all by mid-week, with overnight frost for many pic.twitter.com/UVdTwsMSqU

The Met Office has said sub-zero temperatures will last for at least a week, however, the chilly period could go on for much of this month.

Cold air from Scandinavia will arrive on Tuesday, as Brits who are heading to Bonfire Night festivities have been warned to wrap up warm as temperatures will average around 2C for parts of the country.

The Weather Outlook forecaster Brian Gaze told The Sun: "After a number of mild Novembers in recent years, computer models for the month ahead suggest this November is set to be the coldest since 2010."

Meanwhile, Met Office forecaster Luke Miall added: "A much colder spell of weather arrives as cold air sinks down from Scandinavia and the Arctic from Tuesday. 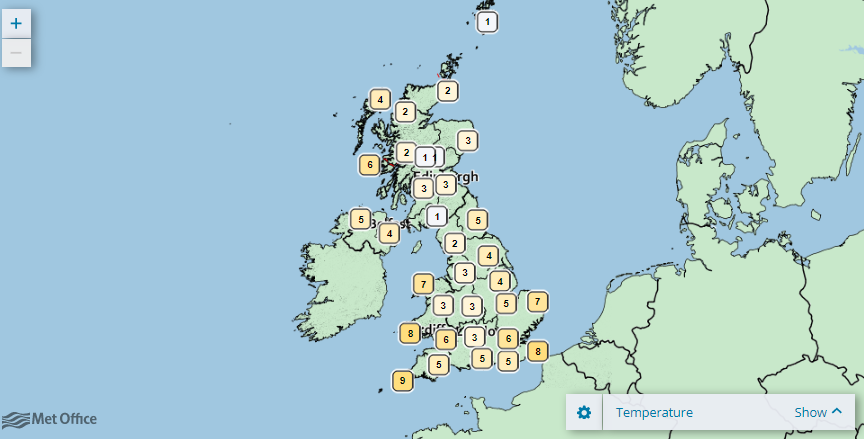 "Wrap up warm for Bonfire Night and wear wellies. After recent rain, there's the risk of cancellations for events using parking on grass.

"Daytime temperatures will struggle to 6-8C for many this week, with midweek showers cold enough for snow in Scotland and to lower levels on Shetland, with 50mph gusts forecast in the South West."

As well as the cold weather, there's a yellow rain warning in place in Scotland today.

It's in place until 23:59 on Monday (November 4) and could cause some disruptions for many.

Below 👇 are the warning ⚠️ details

"Flooding of a few homes and businesses is possible."