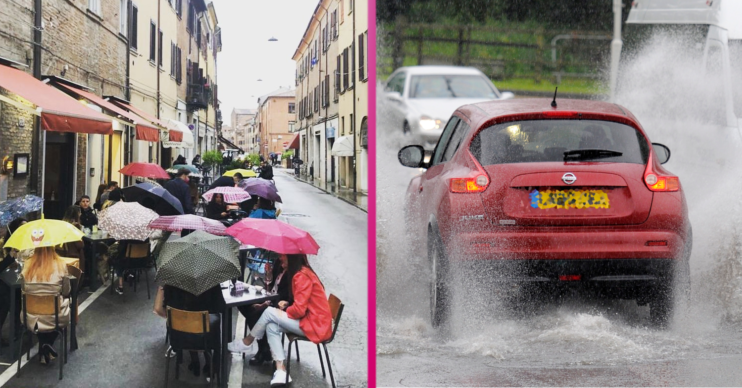 It's going to be a wet one!

The UK bank holiday is underway and sadly, after today, the weather just isn’t going to play ball.

Those of us hoping for a sunshine-filled bank holiday weekend are not going to get our wish, as the weather is set to take a dismal turn.

After sunshine this morning (May 1), May bank holiday weekend is going to be a washout according to UK weather reports.

For those hoping to be enjoying time in the beer garden or dining outside, it might be time to rethink plans…

What is the UK bank holiday weather predicted to be?

The May bank holiday weekend can often be a scorcher, but not this year.

This weekend will instead see weather warnings imposed for parts of the country, as 50mph winds and 40mm of rain are forecast.

Some areas of the country will be hit by an Arctic “blast” with temperatures as low as -4C. However, on average the temperature will sit at a chilly 12C across the weekend.

Read more: Katie Price rages at fiancé Carl and asks ‘how could you do this to me?’

Saturday and Sunday will see a range of weather with sunshine and showers, before Monday becomes a washout.

According to the official Met Office Twitter channel, Monday will be dismal.

It tweeted: “Bank Holiday Monday will see the arrival of low pressure, bringing rain and strong winds for many.”

It will be #sunshine and #showers ☀️🌦️ for Saturday and Sunday

However #BankHolidayMonday will see the arrival of low pressure, bringing #rain and strong #winds for many 🌨️💨

Additionally, the East of England is currently under a yellow weather warning of wind this weekend. Gales of “disruptive winds” will hit from Monday (May 3).

The UK Met Office has issued the warning via its website and stated: “Some delays to road, rail, air and ferry transport are likely.”

What do the experts say?

Forecaster Martin Bowles warned: “People looking to visit a pub or restaurant should go on Saturday or Sunday, but even then, they may well see damp conditions.

“With current restrictions meaning people can’t go indoors, Monday will be a washout all day really, especially if you’re in the west.”

For those in the west, it’s best to pack the raincoats and wellies! The west of the UK has been predicted to see wind and rain warnings, particularly in areas such as Cardiff.

Why is the UK weather so cold?

The bank holiday weekend weather has dropped due to cold weather coming in from the west, and the weather is expected to hit the rest of Europe too.

Additionally, April 2021 has recorded the lowest average minimum temperatures in the UK since 1922. Levels of frost were also recorded at the highest level in 60 years.

Whilst there have been some sunshine spells recently, April showers have been much more common in the past four weeks.