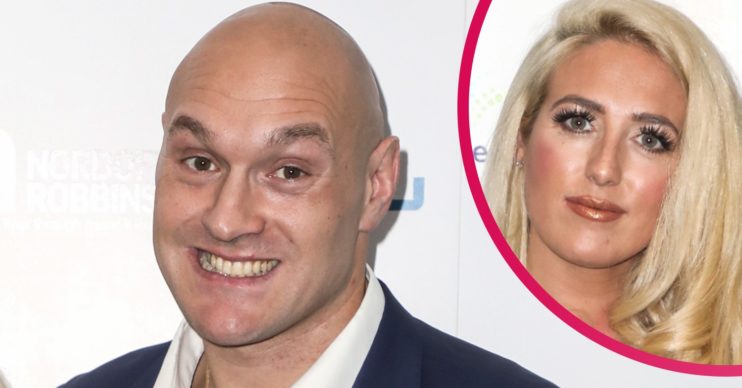 The Fury family pulled out all the stops for little Tyson

Boxer Tyson Fury and his wife Paris have treated their son to a lavish dinosaur-themed bash for his fourth birthday.

The 31-year-old heavyweight champion pulled out all the stops for son Tyson on his special day, which included an incredible two-tier cake and jungle decorations.

Marking the occasion on Instagram with a sweet family shot, Paris told fans: “Had a great day all round, thank you everyone who helped make it special.”

Our world. Had a great day all round thank you everyone who helped make it special. Also all his friends for coming. Kids wearing @designerchildrenswear_store Party organisers @bashpartiesandevents

The 30-year-old mum also shared a string of snaps from little Tyson’s party.

She enlisted the help of a party planner, who put together a personalised sign for the youngster, goodie bags and plenty of yummy treats.

And the surprises didn’t end there, with the kids being treated to a mechanical walking dinosaur and a ball pit.

Alongside a selection of party photos, Paris wrote: “My baby Tyson’s 4th birthday. Big thank you to @bashpartiesandevents for organising everything!

“The balloons, goodie bags, cake, decorating. Made my life so much easier. Always do it myself and stress to death, well not anymore! Will definitely use you guys again. Thank you.”

Paris also shared a shot alongside her husband and son as they posed with a dinosaur.

Tyson and his wife first met when Paris was only 15, with the couple later tying the knot in 2008 in Doncaster.

Just like the boxer, Paris shares a Gypsy upbringing.

My baby Tyson’s 4th birthday Big thank you to @bashpartiesandevents for organising everything! The balloons, goodie bags, cake, decorating. Made my life so much easier. Always do it myself and stress to death, well not nomore! will definitely use you guys again. Thank you.

Read more: Stacey Solomon reveals nerves after leaving baby son Rex to sleep on his own

The couple have since welcomed two daughters, Venezuela, 10, and two-year-old Valencia Amber.

Earlier this year, the heavyweight boxer opened up the doors to his home in a three-part ITV documentary.

The show followed Tyson’s fight against mental illness, the pressures of fame and fortune and how proud he is of his gypsy lineage.

The first episode documented his preparation as he geared up to take on Tom Schwartz. It also delved into his fight to look after his mental health.

Tyson – who was diagnosed with bipolar and obsessive compulsive disorder – suffered a major breakdown in 2015, having just stunned the world when he defeated Wladmir Klitschko.

On the documentary, he said: “I always knew I was unwell, but I always put it to the back of my mind because I had a job to do.

“My job was to become heavyweight champion of the world, so you put all your eggs in one basket and if you’ve an addictive personality, it’s all or nothing in everything you do and you’ve achieved your dream and there’s no further you can go in your career.

“That was Everest and that’s it – it all came crushing down.”

Tyson also reflected on his relationship with Paris, saying: “We were bestest best friends in the whole wide world and then we ended up marrying each other.

“Without Paris and these kids in my life then my life ain’t worth having anyway.”