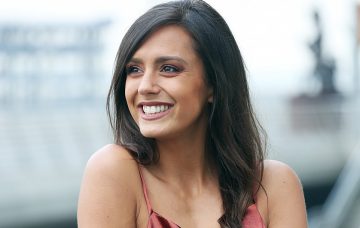 She's been with boyfriend Ross for nine months

The 25-year-old, who has been dating boyfriend Ross for nine months, told OK! Magazine she took a pregnancy test in the toilet at Nando’s during lunch as she couldn’t wait until she got home.

Tyla, who is around four months pregnant, said she’s “over the moon” to be expecting but was initially concerned it had all happened too fast.

She explained: “When I saw it was positive, I ran back to tell Ross – it felt like the longest journey of my life! I was over the moon but part of me was worried too. We haven’t been together very long and we’d only just moved in together. I started to panic that we had rushed.”

Tyla said her boyfriend is “very private” and doesn’t want to be famous.

“It’s really refreshing to be with someone who has no interest in the industry,” she said. “He has a great job running a logistics company and is a property developer too.”

Tyla found fame in the third series of Love Island in 2017, which was won by Amber Davies and Kem Cetinay.

She was coupled up with the likes of Jonny Mitchell and Muggy Mike, but ultimately didn’t find love on the island.

In her chat with OK!, Tyla defended the show against accusations scenes were ‘fixed’ following all that drama over whether Georgia Steel and Jack Fowler’s ‘kiss’ had been filmed more than once.

“What you see on TV isn’t fake, but they have to make it as succinct as possible for the viewers so they do ask you to have certain conversations,” she said.

“If you’ve had three conversations with three different people, they might ask you to put it all into a conversation with one person so it’s easier for them to film.”

Tyla’s not the first Love Island star to become a parent.

Series one couple, Cally-Jane Beech and Luis Morrison, have a daughter, Vienna.

Have you got any baby name suggestions for Tyla? Leave us a comment on our Facebook page @EntertainmentDailyFix and let us know what you think!