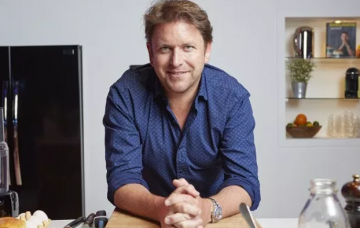 The TV star turned that sharp tongue on his own relationship, revealing that marrying his partner of seven years, PA Louise Davies, “doesn’t interest me in the slightest”.

The star of US road-trip series, James Martin’s ­American Adventure admitted: “No, it doesn’t interest me in the slightest, mainly because I’ve catered for so many weddings, really.

He said: “I go round to my mate’s house, who has four kids, and realise that I don’t want them after about two minutes. Kids are great, but it’s just no, not for me. You sacrifice so much in this work and the job and everything else. Never, no.”

The popular TV chef met Louise seven years ago on the set of Celebrity Who Wants To Be A Millionaire. They now live in Hampshire, with their dogs, Cooper and Ralph.

James also revealed that he “can’t live without” his partner, but that he considers his set of vintage cars to be his “babies”.

If you’re wondering, that includes a 1948 Maserati, a vintage Chevrolet Corvette, a Lotus 340R and two retired Formula One cars.

Read more: James Martin vows to keep private life out of the spotlight

It comes just a few weeks after the 46-year-old insisted he would never talk about his relationship in public.

In an interview with The Daily Mirror, James revealed how “mega-famous people” warned him of the dangers of giving too much personal information away.

When asked about his relationship with Louise , he told the newspaper: “[I] don’t answer those questions. They all try – but you’ll get nothing. I always keep my public and private life separate.”

James continued: “I’ve met some mega-famous people who’ve told me, ‘If you open that up, you’ve nowhere to go.’

“One very high-profile person said, ‘Build big gates at home for peace of mind.’ And I did, so when I go back home that’s my time.”

It’s nice that James is opening up a little bit more. But let’s hope he actually spoke to Louise about all this first, before telling the world…

What are your thoughts on marriage? Leave us a comment on our Facebook page @EntertainmentDailyFix and let us know what you think.