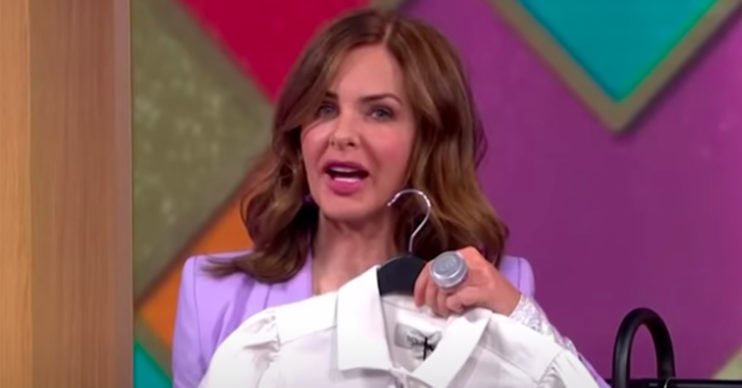 Trinny Woodall says she almost walked off This Morning over wearing a ring.

The What Not To Wear star, 56, says ITV bosses took offence to her wearing a ring from her own jewellery line.

According to Ofcom guidelines, hosts are not supposed to feature products with no editorial justification.

However, Trinny says she wouldn’t budge, and said she’d rather give up her ITV gig than take off her favourite accessory.

Speaking on the Emma Guns podcast, she said: “I always wear this ring cause I always wear big rings. After a while I remember the editor said: ‘Trinny you can’t wear that ring!’ I was like ‘Why not?’

What did Trinny say about This Morning?

“He goes: ‘Well because it’s an ad for your brand.’ I go: ‘Darling it’s the ring or me. I’m very happy to give up fashion on This Morning, but this is my ring, it’s me. I always wear big rings, people can make of it what they will.'”

The large ring features a lip balm from her make-up range.

Phillip Schofield, 58, asked her if was going to say anything.

To which an irritated Trinny replied: “I will, I couldn’t bloody well hear you.”

Did Trinny swear on This Morning?

Covering her mouth in shock, her trademark huge ring was very much on display.

Trinny has been dating Nigella Lawson’s ex-husband, Charles Saatchi, since 2014.

While demonstrating her skincare routine on an Facebook live stream during lockdown – Charles accidentally walked in naked.

Viewers were left stunned when the 74-year-old popped up in the background completely nude.

The video was promptly deleted – and neither Trinny nor Charles have commented on the incident.

What Not To Wear may have ended back in 2007, but Trinny continues to be a fashion expert.

In addition to her This Morning presenting gig, she also has her own make-up line.

And she has quite the social media following – of well over 500,000 fashionistas.

Speaking to The Sunday Post, she says she loves using social media as an outlet.

She said: “I think social media is the most exciting thing.

“I’ve never done photographs on social, it’s always been about having an immediate connection with video, and that’s the joy of social compared to, say, a TV show. Nobody is telling me what to do or editing me, so I feel like I can really blossom as myself.”

ITV This Morning Trinny Woodall what not to wear