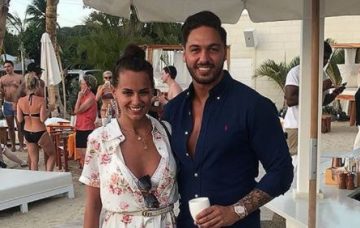 The former Celebrity Big Brother housemate has revealed fiancée Becky Miesner is pregnant with their first child – and they’re both thrilled!

As a result of the happy news, they’ve now postponed their wedding, which was planned for August, until after the baby is born.

The couple told OK! magazine they’d been trying to get pregnant but it wasn’t happening for them, so they decided to take a break for a while – which is when it happened!

Mario explained: “It was getting quite stressful so we decided we needed to relax a bit. But as soon as we went back to just having fun, she fell pregnant!”

The little one will have no shortage of pals to play with: Mario’s sister Giovanna has two children – Buzz, four, and Buddy, two – with her husband, McFly’s Tom Fletcher, and another one on the way!

Mario also shared the happy news on Instagram, telling fans: “I am sooooo happy to announce that my beautiful fiancée @beckymiesner1 and myself are expecting our first baby together!! #babyfalcone.”

Fans have inundated the couple with congratulatory messages. 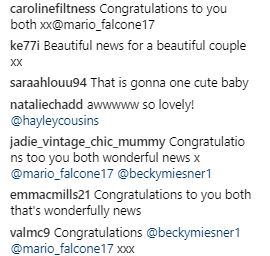 Mario shot to fame on The Only Way Is Essex, where he was best known for his on-screen romance with co-star Lucy Mecklenburgh, which ended in 2012.

He became engaged to Becky last year after popping the question during a romantic holiday abroad.

Mario announced the engagement via Instagram, sharing a photo of the moment he dropped to one knee and asked for Becky’s hand in marriage.

The wedding will now take place next summer.