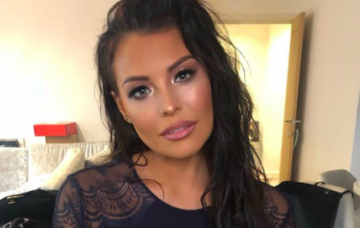 Oh, this is a lovely one

Beside the picture of the Strictly Come Dancing professional dancer kissing her, she wrote: “#tbt #newyears.”

The comment proves these two have been dating for at least a couple of months, despite only revealing the romance this week.

Giovanni confirmed the romance on his Instagram on Wednesday.

The 27-year-old Italian posted an adorable photo of him kissing Jess on the cheek.

He added in the caption: “Buon San Valentino.” Jess, 32, replied by posting a love heart emoji.

Commenting on the sweet new snap, one said: “Yes! Cute couple.” Another added: “So lovely to see you happy @jesswright77.”

A third wrote: “Awww. You look so happy together. Good choice x.”

Giovanni and Jessica’s romance may have taken many fans by surprise, but the pair were actually linked towards the end of last year.

The Sun reported in December that the couple had been dating in secret for a month after being introduced by Jessica’s brother – a past Strictly contestant.

A source said at the time: “They’ve been on a few dates, but it’s early days. They met through her brother Mark’s Strictly connections from when he was on the show and they’re getting to know each other.”

In fact, they were first spotted together in November, and then again in December, when they visited London’s Soho House, followed by a trip to see West End show Dream Girls.

The insider told The Sun: “It was obvious to everyone it was a date. They were talking really closely, leaning into each other.”

Jess is best known for her five years on ITV’s The Only Way Is Essex. She appeared on 16 series from 2010, quitting in February 2016. She has since been working as a singer, and recently released a workout DVD.

She previously dated her co-star, Ricky Rayment for two years until 2014.

Meanwhile, Giovanni dated actress Georgia May Foote, 27, for a year, after they were partnered on Strictly in 2015.

He has also been linked to Strictly choreographer and dancer Luba Mushtuk, as well as his last dance partner on Strictly, 59-year-old Debbie McGee.

Debbie laughed off romance rumours at the time.

Speaking on Loose Women, she said: “They’re totally ludicrous! We do have a special chemistry, he’s a very special person to me, I’m sure I am to him. We love each other to bits, but there’s nothing more than a friendship there.”

Do you think they make a cute couple? Leave us a comment on our Facebook page @EntertainmentDailyFix and let us know what you think!