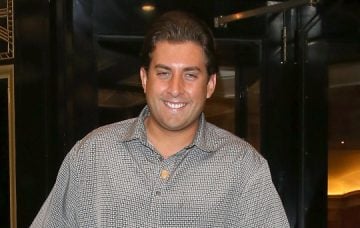 He has now been discharged from hospital

James ‘Arg’ Argent has fractured his right shoulder after being involved in a second moped accident.

The 30-year-old star was rushed to the nearest A&E after coming off his Vespa motorcycle in the “bad weather”, and coming away with the nasty injury and a “gash” on his arm.

Revealing he had been discharged on Tuesday, Arg wrote alongside an Instagram picture of himself in a hospital gown on the ward: “Finally out of hospital.

“I don’t think Vespas were made for this weather & conditions! #LearnTheHardWay #Becareful. (sic).”

It’s not the first time The Only Way is Essex star has suffered an accident on his moped.

Earlier this year, he had another brush of bad luck in terrible weather, but while his bike was destroyed, he escaped with no serious injuries.

At the time, he said: “My poor bike but at least I’m not seriously hurt!”

The former The Jump contestant took to the photo-sharing app to reveal the exciting news, and he shared a snapshot of his results which revealed he got 43 correct answers out of a possible 50 on the multiple choice section, and scored 44 out of 75 on hazard perception.

It now means The Only Way is Essex star has until June 7, 2020 to pass his practical driving test and earn his licence.

James had been working hard to pass his test on the E4 show, which saw the likes of Mikey North and The Vamps’ Tristan Evans on a mission to get behind the wheel.

It was previously reported that Arg’s girlfriend Gemma Collins was keen for her man to learn to drive.

A source told The Sun: “Arg is really nervous about the week of intensive driving lessons, he has struggled with lessons in the past.

“But Gemma really wants him to pass because she loves cars and thinks it would make their lifestyle much better so he could drive her around for a change.”

Leave your get well soon messages for Arg on our Facebook page @EntertainmentDailyFix.