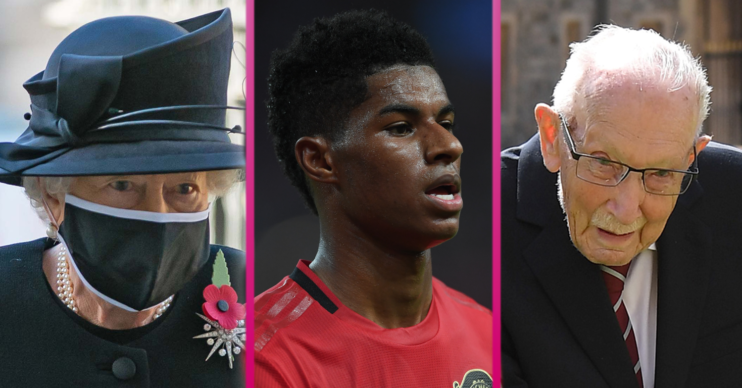 2020 has been a tough year for all of us to say the very least. But when bad times strike, almost always a fair few heroes will emerge.

And this tumultuous year has certainly resulted in some inspiring Brits finding their own way into the spotlight.

Here at ED!, we have rounded up who we think are 10 of the most inspirational heroes of 2020…

Of course, no list of British heroes would be complete without the NHS.

The National Health Service has worked around the clock this year to handle the coronavirus crisis.

While tragically thousands of lives have been lost, many more have been saved thanks to NHS staff doing their absolute best throughout the pandemic.

Joe Wicks went from simply being a healthy living celebrity to helping a nation stay fit during lockdown.

The health guru launched his own PE workout series on YouTube. Working out from his living room, thousands of Brits completed his compact but rigorous PE workout routines.

And he even donated all of the proceeds from his YouTube videos to the NHS.

Her Majesty has had a hell of a year. Pandemic aside, there has been all kinds of crises and dramas from within The Firm.

But The Queen has remained as stalwart as ever, and worked relentlessly throughout this year.

Although forced to shelter due to her advanced age, she’s continued to work from her bubble. In addition to her royal and charitable duties, she also gave her rousing We Will Meet Again speech in April.

Viewed by 24 million people, it provided a glimmer of hope during one of this year’s darkest periods.

Who can ever forget Captain Tom Moore, or rather Sir Tom Moore as he is now thanks to his amazing fundraising efforts.

The veteran, 100, raised money for the NHS by walking a hundred laps across his garden. He managed to raise over £32 million, despite only having a £500,000 target.

Tom went on to be knighted by The Queen, appeared on Piers Morgan’s life stories, published a book and even has his own gin out.

Marcus Rashford was appalled when the government voted against providing free school meals to children outside of school time.

And the professional footballer helped to raise a staggering £20 million for a charity which provides free food for children.

The Manchester United player also helped raise public awareness of the issue and is now very much considered a British hero.

In addition to the NHS, essential workers continued to work throughout the pandemic.

From supermarket workers to bin collectors to traffic wardens – all stayed out in their public facing roles this year.

Putting their health on the line to serve, we salute them all.

This helped thousands of parents teach their children mathematics while in lockdown.

In fact, so many parents were downloading the program at one point that the site temporarily crashed.

While Piers may traditionally be a figure we all love to hate, he’s done well in 2020.

The GMB host has held Government and businesses accountable and demanded answers throughout the pandemic.

The Army has helped build the Nightingale hospitals, which are temporary hospitals specialising in COVID care.

And they’ve been up and down the nation helping to organise mass coronavirus testings to the masses. We can only thank them for their relentless efforts.

He emerged as a hero during a Black Lives Matter protest in London when he saved a man who was being attacked.

A photograph, which has been named CNN’s Most Inspiring Moment, shows Patrick carrying the man away to safety.