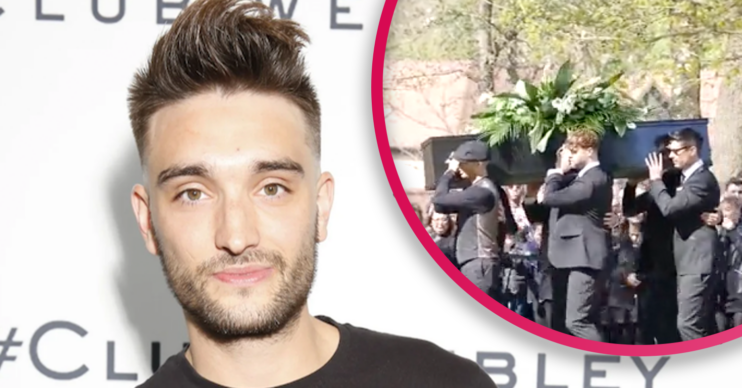 Inside Tom Parker’s funeral: Heartbreaking tribute from star’s kids as Kelsey breaks down

The Wanted stars carried his coffin into the service

Fans of The Wanted lined the streets to pay tribute to the star, who died aged 33 at the end of March.

Fans dressed in black lined the street, as Tom‘s wife Kelsey had requested.

Arriving early this morning, the streets were full, with Kelsey visibly welling up as she saw the fan support for her late husband.

Tom’s black coffin was transported to the service on a horse-drawn carriage.

At the front of the funeral cortege was a floral heart with the word TOM spelt out in the centre.

A floral tribute made from rainbow roses spelt out the word DADDY – a final goodbye from the singer’s children Aurelia, two, and Bodhi, one.

Lillies adorned the top of Tom’s coffin and a round of applause from fans rang out as the cortege passed by.

Arriving at the church, Tom’s coffin was carried by his The Wanted bandmates Max George, Nathan Sykes, Siva Kaneswaran and Jay McGuiness.

The service took place at the Saint Francis of Assisi Parish Church in Petts Wood and was relayed on screens outside so that fans could watch it too.

Meanwhile, as the coffin was carried into the church, Oasis song Champagne Supernova was played.

Of course, it was revealed that as Tom died surrounded by his friends and family, the Oasis hit Live Forever was playing.

The music at Tom’s funeral featured a number emotional songs including Amazing Grace and You Raise Me Up.

The service began with a violinist-accompanied version of You Raise Me Up, sung by Ollie Marland.

Of course, Tom fans will know that he and Ollie released music together as part of dance duo Lost + Found.

Handbags And Gladrags, also accompanied by a violinist, was sung by RuthAnne Cunningham.

She also sung a rendition of Amazing Grace.

Widower Kelsey arrived at the funeral arm-in-arm with her parents, supporting their heartbroken daughter.

A pre-recorded message from Kelsey was played at the service, surely as a result of Tom’s wife being too upset to speak on the day.

It recounted their first meeting and heard her pay tribute to her “soulmate”.

“‘Marrying you was the best day of my life… soulmates, that’s what we are,” she said.

I could actually hear him saying: ‘It’s about time’, as he carried us for the last 12 years.

The Wanted star Max George also spoke at the funeral.

He joked about the band’s role at pallbearers and said: “I could actually hear him saying: ‘It’s about time’, as he carried us for the last 12 years.”

As well at The Wanted, One Direction singer Liam Payne also attended the service.