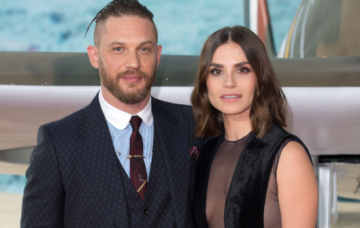 Tom Hardy has become a dad for the third time

Tom Hardy has reportedly welcomed a baby boy with his wife Charlotte Riley.

The 41-year-old actor – who already has 10-year-old son Louis with Rachael Speed, and a three-year-old daughter with Charlotte (whose name has never been revealed to the public) – is believed to have welcomed his third child into the world last month.

Sources claim the tot has been named Forrest in a nod to the titular character from Forrest Gump.

An insider told The Sun newspaper: “The couple are over the moon with the new addition to the family.

“Friends are already saying that the baby boy looks exactly like Tom.

“They’ve been lying low over the festive period so they can get used to having a busier household and adjusting to the needs of a newborn.

“They love the name Forrest as it’s earthy and strong. Tom has always found the movie Forrest Gump very inspiring and enjoyable and thinks it fits.”

As of the time of writing, neither Tom nor Charlotte have commented on the reports.

Meanwhile, the Venom star admitted in August last year that he doesn’t think there’s a “harder job on the planet” than parenting.

He said: “There is no harder job on the planet, and more important, than parenting.

Prior to the birth of their second child together, Tom and Charlotte, 37, relocated from their mansion in south west London to a more rural area on the outskirts of the city after being pestered by an obsessive female fan, as they wanted privacy for their new arrival.

A source said at the time: “Tom is living his new life in the country and has been seen dog-walking every morning.

“He feels it’s the perfect place for him and Charlotte to bring up their new baby.”

What do you think of the name? Leave us a comment on our Facebook page @EntertainmentDailyFix and let us know.