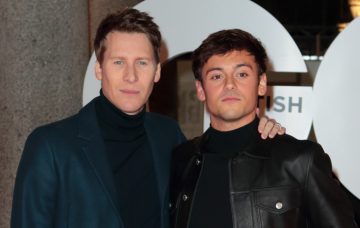 The couple became parents for the first time in June

The 44-year-old director admits he and the 24-year-old Olympian are keen to have a big family since welcoming baby Robbie into the world in June, after finding a surrogate mother in America.

Speaking on Lorraine on Tuesday, Dustin said: “We looked at many different options at the beginning.

“But I think it became clear we wanted a biological connection to our first born.

“Who knows where we are going to go from here! We might end up with ten, eleven. It takes 11 to make up a full football team right?

“Tom has lost his father, I had lost my mom and brother and you start to yearn for that connection that goes from your past to your future, and surrogacy was one of the ways we could do it.

“We decided to go to America after we did our research.”

The Milk writer revealed that he and his partner have a strong connection with the surrogate mother and they are planning to have an ongoing relationship with her as their baby grows up.

He said: “In the US … they encourage you to build a relationship with someone who will become your surrogate.

“You don’t enter into this until there is a friendship, a relationship there with her and her family and it’s an ongoing relationship for the rest of your life.

“Your child born of surrogacy has a right to know where they come from and the right to have a relationship with the person who brought them into this world.

“After a year and a half of spending this most intimate, beautiful time with this woman who’s given us this incredible gift, are you kidding me! She couldn’t get rid of us if she tried!”

The couple became parents for the first time in June after welcoming their son, Robbie, via a surrogate.

They chose to name their son after Tom’s late dad Robert, who passed away in 2011 of a brain tumour.

Tom said the arrival of his son was the “most magical moment in my life”.

He added at the time: “The amount of love and joy you have brought into our life is immeasurable. Our precious son.”

Tom told The Guardian in July that he’d been preparing for fatherhood since he was a teenager.

Do you have children? If so, how many? Leave us a comment on our Facebook page @EntertainmentDailyFix and let us know what you think!