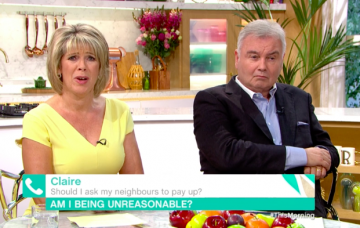 It was a bit uncomfortable

Most of the time, Ruth Langsford laughs off her husband’s on-air jokes, but on Thursday’s episode of This Morning, Eamonn Holmes went too far – even causing the guest to tell him off.

The tense moment occurred during a segment with guest and resident agony aunt Maria McErlane.

A viewer asked whether it was fair to expect her boyfriend to pick up the tab on their dates, and both Maria and Ruth agreed it’s “not the 1950s”, and that she should be covering half the cost.

Maria told the presenters – who are covering the ITV sofa while Holly Willoughby and Phil Schofield are on their summer holidays – that: “I think it’s very unreasonable. I think with modern partnerships – as Ruth and Eamonn will attest – people share.”

Eamonn, 58, then piped up: “This is what Ruth does, right, ‘Oh, I’ll get that…'” He then mimicked his wife patting her pockets like she’d forgotten her purse, adding: “So, I pay for everything.”

An angry-looking Ruth shook her head, refusing to look at her partner of 22 years.

A shocked Maria looked to the camera and said: “I think it’s unreasonable of Eamonn to keep attacking Ruth in this way.”

Viewers of the ITV show agreed it was an awkward moment. 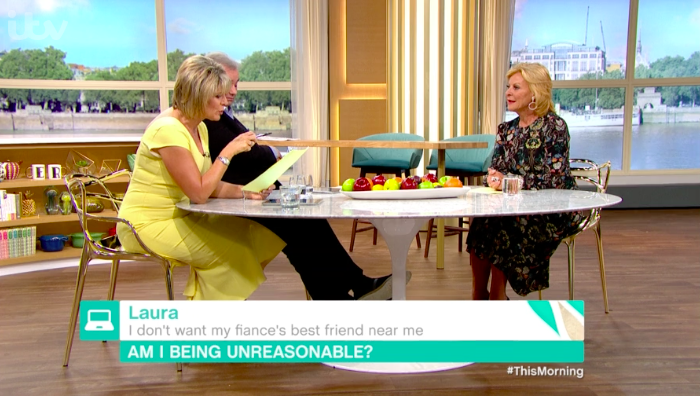 Another tweeted: “eamonn and ruth are honestly painful to watch, just constantly fight n talk over each other !! phil n holly pls come back 😢 #ThisMorning”.

A third added: “Eamonn sitting there sulking. So rude”.

It follows another on-air ‘joke’ this week from the Northern Irish presenter on This Morning.

In a segment about love stories on Wednesday, Eamonn asked his wife: “I believe in love at first sight, do you?”

We’re glad Maria defended Ruth. Let’s hope Eamonn apologised in the ad break and they made up!

Do you mind their bickering or is it annoying? Leave us a comment on our Facebook page @EntertainmentDailyFix and let us know what you think.