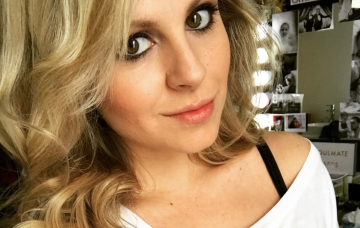 It was revealed last week that Tina O’Brien had married her long-term partner, Adam Crofts, and now we’ve finally had a look at her beautiful wedding dress.

Tina, who plays Sarah Platt in Coronation Street, shared her pictures and said: “It’s amazing to finally be husband and wife!”

In an exclusive shoot and interview with OK! magazine, the actress spoke about marrying businessman Adam after seven years together.

The 35-year-old added: “I just felt excited to finally be getting married. It had been a long time coming!”

The couple wed in Tina’s hometown of Manchester at the boutique hotel, King Street Townhouse, surrounded by Corrie stars.

On-screen boyfriend Mikey North, aka Gary, and his wife Rachael Isherwood, and Tina’s on-screen mum Helen Worth, better known to soap fans as Gail, were also in attendance.

“He was supposed to open it but he just handed it over. He did amazing considering he is only four! I think he was very proud of the part he played.” She also laughed about how Beau had been ‘marrying’ his friends at nursery.

The actress wished fans a happy New Year last week, sharing a picture of her new name in lights, along with the wedding date.

Beside it, Tina wrote a sweet tribute to her new husband, telling her followers: “Happy New Year! Starting 2019 as a married woman, what a man I’m married to… @adamcrofts you inspire me every day.

“Sexy, smart, funny, kind and compassionate are just a few of the attributes your new wife has .. ahh just kidding you’re all of those things and more 😘.”

It followed her relationship with Corrie co-star and CBB winner Ryan Thomas. The pair share custody of daughter Scarlett.

It looks like it was a wonderful day for Tina and Adam. Read the full interview in Tuesday’s issue of OK! magazine.

What do you think of Tina’s dress? Leave us a comment on our Facebook page @EntertainmentDailyFix and let us know what you think.