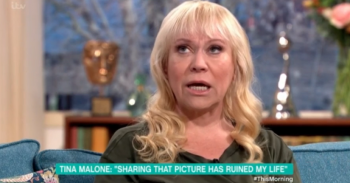 She was given a suspended sentence for sharing the photo

Tina Malone has asked her fans to stop donating money to help her pay off her £10,000 legal fees for sharing a photo of one of James Bulger’s killers.

The actress was handed an eight-month suspended sentence and a £10,000 fine after admitting she breached an injunction protecting Jon Venables’ identity during an appearance in court last week.

Tina broke down in tears during an appearance on This Morning this week as she said she can no longer take her five-year-old daughter to Disney because she has to pay off the fine.

After Tina was given the whopping fine, some of her fans have been flocking to help her out financially.

One person has even set up a JustGiving page to collect donations that would help Tina pay off the costs.

According to the Mirror, the fan wrote on the page: “For those who have watched This morning today would of seen the interview with Tina Malone.

“She is heartbroken at being giving a massive £10,000 fine and a suspended sentence over sharing a picture of a child killer.

“1000s of people shared it but because she is a celebrity she has had to endure a horrid 2 years.

“Why does a child killer get to live with anonymity and who re-offends but she has her life destroyed. So please share and donate.. Lets help her.”

Although Tina was grateful for her fans’ devotion to help her, she instead asked them to donate to the James Bulger Memorial Trust, of which she used to be an ambassador.

She tweeted: “Instead of go fund me pages for my debt plse donate to the James Bulger memorial trust thankyou. (sic)”

Replying to the fan who set up the JustGiving page, Tina wrote: “Thanks but I’d prefer it if you would give or donate any money raised on my behalf to the James Bulger memorial trust.”

It came after Tina, 56, broke down as she spoke about her legal trouble on This Morning.

She said: “I just thought if something was out there because of the current situation of the person involved, I just didn’t realise what I was doing was illegal.

“I didn’t mean to incite or provoke any violence or anything and it was over a year ago, and the repercussions have been horrendous on my life.”

The actress told the programme that just prior to making the post on Facebook, she had “just come out of a breakdown in the January, I was on heavy anti-depressants, that’s no excuse, and I’ve had a difficult 18 months”.

Tina said it was “all my fault” and that she has learned her lesson, but that she feels she has let her family down.

An injunction was made “against the world” in 2001, which bans the publication of anything that purports to reveal the identities of Venables and Robert Thompson.