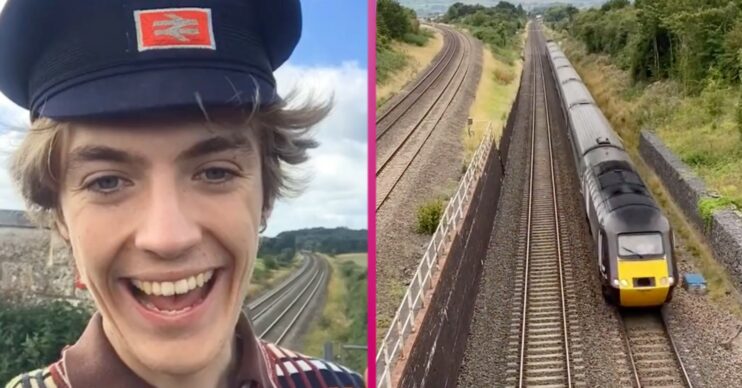 Spreading joy to the online world

For some added joy in your life get to know TikTok trainspotter Francis Bourgeois.

He appeared on This Morning earlier this month where delighted ITV daytime viewers with his passion as he chatted with Holly Willoughby and Phillip Schofield.

But who is Francis Bourgeois and why is he famous on social media?

Who is TikTok star Francis Bourgeois?

Francis is a 21-year-old who has captured the imagination of TikTok users with his short videos about trainspotting.

He is an engineering student at the University of Nottingham and hails from north London.

Francis first became interested in trains and railways when he was just four years old.

However, his social media fame has now expanded after he was profiled by The Times and his appearance on This Morning.

Why is Francis Bourgeois famous?

Francis charmed TikTok fans when he resumed his childhood hobby during lockdown.

He began sharing videos of his trainspotting outings, and now has over 530,000 followers on the social media platform.

I love to show how awesome trains can be as well as trying to make you smile, laugh and just try and bring joy.

One particular video showed the enthusiastic train fan getting so excited about a class 377 locomotive passing him that he fell out of his chair!

That clip has racked up nearly 7 million views by itself. Viewers loved how he managed to save his Percy Pigs sweets even as he tumbled out of his chair.

How did Francis Bourgeois become a trainspotter?

Trains first captivated Francis after he enjoyed trips to Willesden Junction near his family home in north west London with his dad.

He explained: “I was just fixated by these big machines.

“Ever since, I’ve had a passion for trains, cars, planes.”

What else do we need to know about Francis Bourgeois?

Francis owns a 1980s train worker’s uniform which he treasures and sometimes wears in his videos.

He is also much-loved for the unique filming angles he uses due to a wide-angle face camera accessory he frequently straps to his head.

However, Francis has also been criticised by some viewers who claim he is not genuine.

He replied to the accusations in a recent clip by sharing an image of himself as a young boy surrounded by toy trains and in a railway worker’s uniform.

Francis added: “I love to show how awesome trains can be as well as trying to make you smile, laugh and just try and bring joy.”

This guy Francis i love him …. follow him on tiktok @thismorning pic.twitter.com/TopHVTOdQj

How did This Morning fans react to Francis Bourgeois?

Many of those watching at home were impressed with Francis and his enthusiasm.

A viewer wrote on Twitter: “Love Francis. How refreshing to see such enthusiasm and such a lovely young man. Just what we need on a Monday morning! He deserves to go far with his career.”

And another tweeted at the This Morning account: “We have just watched Francis and are in love.”

It was even suggested his knowledge should see him get involved with politics.