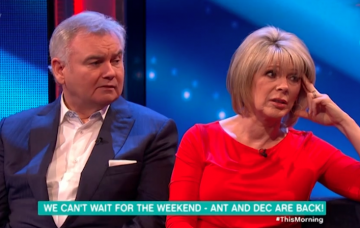 Ruth Langsford ticks off Ant and Dec for disrupting her morning

This Morning host Ruth Langsford gave guests Ant and Dec a bit of a telling off after traffic mayhem caused by the new series of Saturday Night Takeaway left her unable to find a parking space.

“I knew you were back because I couldn’t get parked,” she chided the Geordie pair as they hinted at what viewers can expect from the upcoming run of shows.

“All of your [production] trucks were in the way and I had to drag my car across the car park.”

As it turns out, Dec had experienced the same issue – but didn’t initially realise it was for preparations for his show causing chaos on the roads near London Studios, where This Morning is also filmed.

He laughed: “We had the same problem yesterday with all of our trucks!

“I thought: ‘Who is this getting in the way?’ It was chaos but it was just us!”

During practices for the stunt, Dec admitted both stars had pranged their trucks.

“We had to give it a go earlier and we both crashed quite badly earlier today,” he said.

Ant laughed: “Each truck costs a couple of hundred thousand pounds, so no more crashes!”

Are you excited by the return of Saturday Night Takeaway? Let us know by commenting on our Facebook page @EntertainmentDailyFix.