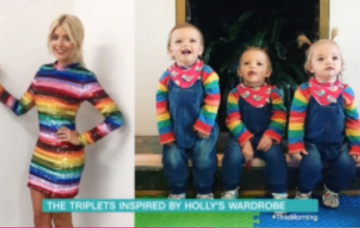 These triplets all dress like the This Morning host

Phillip Schofield has melted the hearts of This Morning viewers after he showcased his baby sitting skills on Monday’s show – with three mini-mes of his right-hand woman!

As they appeared on the show, the toddlers, Amelie, Bertie and Etta, were all wearing the same denim pinafore and white shirt that Holly was sporting.

After struggling to have their first child, son Felix, Rebecca and her husband underwent IVF treatment in the hope of expanding their brood.

But they were left shocked after being told Rebecca was expecting not one, but three babies.

Speaking about how she felt after discovering she was pregnant with triplets, Rebecca told Holly and Phil: “I cried and then I had to stop crying because I was going to be sick.”

Rebecca revealed she almost lost her life during labour and the triplets even needed multiple emergency lifesaving surgeries after they were born.

In the months that followed, the girls were in and out of hospital with a series of problems leaving Rebecca being diagnosed with post-traumatic stress disorder.

One way she dealt with having the condition was to bond with her girls by dressing them up in adorable outfits.

Holly, who said she was “honoured” to be the triplet’s style icon, asked: “How come you decided to do my style of the day?”

Revealing why she chose to dress her tots like style icon Holly, Rebecca said: “In terms of someone who is an ambassador of positivity and fun I couldn’t think of a better person.”

“It really is representative of this new chapter in our lives,” she continued. “There has been that cloud hanging over us. since we started tripling the look we feel that cloud has lifted and we’re enjoying being a family in good health.

“I have been doing our ‘triple the look’ every day now for the past two weeks and I can’t see myself stopping anytime soon.”

Rebecca said she and her husband even tried to dress their older son Felix like Phil, but he “wasn’t very accommodating”.

Fans fell in love with the super sweet toddlers and many took to Twitter to gush over Phil entertaining the infants.

“How cute are you with the triplets on @thismorning,” one person said. “Do you fancy coming to baby sit my 2 girls?”

Another said it was “beautiful and heartwarming.” 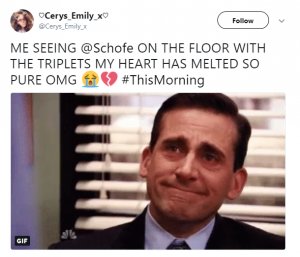