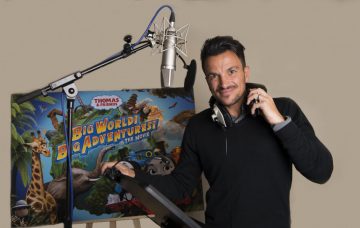 He said he's thrilled to be part of the iconic franchise

Peter Andre has been announced as a guest star in the new Thomas The Tank Engine film.

The Australian singer and entertainer will lend his voice to the thrill-seeking, bright yellow rally car Ace, also an Aussie, in the 80-minute Thomas and Friends: Big World! Big Adventures! The Movie.

The animated film will see Thomas embark on his biggest adventure yet, mischievously led by Ace, who inspires him to leave Sodor and travel across five continents without the permission of the Fat Controller.

Peter said: “It is a real honour to be voicing the character of Ace in the new movie and such a buzz for me to be doing my first worldwide movie voiceover for something that I grew up on and loved as a child and that my kids now love too.

Read more: Phillip Schofield reveals how he once saved his dad’s life

“It is incredible for me to help introduce young viewers to the diverse range of cultures, different ways of life and animals that exist on our planet today.

“It’s really nice to see that Thomas & Friends has embraced this – it is a great new direction for the show and I think it’s going to be fantastic.”

Peter said he relates to Ace’s carefree character, which he “can’t wait” to unleash on to screens.

“He has a lot of bravado, but as soon as he sees an animal, he’s petrified,” said Peter.

“He’s a really cool character and he’s a great one for me to be able to play because, being Australian, I can relate to his attitude a little bit.”

“A lot of people have this image of Australia as being very carefree and I live like that. It’s so nice to play a character that represents that,” he added.

The hitmaker also recorded new song Free and Easy for the film, which will be available on Spotify for the launch.

The latest movie in the franchise marks a new direction for the world-famous train following a refresh of the brand.

Billed as the “biggest and best Thomas movie to date”, the offering will feature seven new songs and see the well-loved character traverse deserts, mountains and jungles across the globe.

Thomas & Friends: Big World! Big Adventures! The Movie will be showing across 400 cinemas nationwide from July 20.

Will you be watching the movie? Leave us a comment on our Facebook page @EntertainmentDailyFix and let us know what you think!