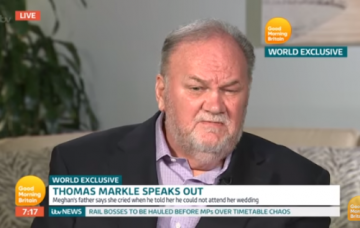 He's unhappy the President will meet the Queen before him

The Duchess of Sussex’s father Thomas Markle has complained about the royal family arranging to meet President Donald Trump before him.

The 73-year-old, whose daughter Meghan married Prince Harry in May, told TMZ he feels he’s been put in the “penalty box” after giving an interview to Good Morning Britain last week.

He said: “If the Queen is willing to meet our arrogant, ignorant, and insensitive president she has no excuse not to meet me, I’m nowhere near as bad.”

The president is due to meet the monarch when he visits the UK next month, while Thomas is yet to meet any of his daughter’s in-laws, including her husband Prince Harry.

The retired Hollywood lighting director missed walking Meghan down the aisle due to health problems which prevented him from travelling to the nuptials in Windsor.

Prince Charles had to step into his place and Meghan’s only family at the wedding was her mum, Doria Ragland.

Prior to the event, Thomas had been involved in a scandal where he had been caught out selling pictures of himself trying on his wedding suit which he’d staged with the paparazzi.

He then suffered from heart problems which meant he was unable to attend the big day.

On last week’s Good Morning Britain, Thomas told Piers Morgan and Susanna Reid that he would love to meet Queen Elizabeth II, as he has always admired her.

He added that he was also keen to meet his new son-in-law.

“I look forward to coming to London soon and seeing them. I’d love to,” he said.

However, it seems a date has not yet been set, as the Duke and Duchess of Sussex have been busy undertaking a number of official engagements since their wedding.

Thomas said he hasn’t heard from Meghan since his tell-all interview last week – where he spoke about her as a child and expressed his regret at having to watch her marry on TV.

He also said he hasn’t heard from any other members of the royal family.

Meghan has certainly been busy of late. She recently joined the Queen at events in Cheshire on her first official solo outing without Harry, and last week went to Royal Ascot.

The couple are set to undertake royal engagements in Ireland in July, and take a tour to Australia in the Autumn.

Does Thomas Markle deserve to meet the Queen before President Trump? Leave us a comment on our Facebook page @EntertainmentDailyFix and let us know what you think!