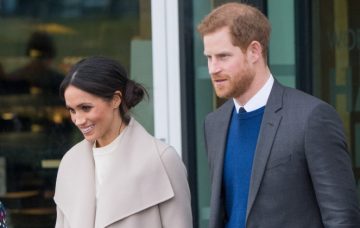 Meghan, the Duchess of Sussex’s father has predicted she and Prince Harry will start a family soon.

Thomas Markle told ITV’s Good Morning Britain that his 36-year-old daughter has always loved children so it wouldn’t surprise him if the newlyweds are already planning a baby.

He added: “I don’t think there is a stork in the air yet but I think it will happen sooner or later.”

Thomas, 73, was forced to miss the Royal Wedding due to ill health, undergoing emergency heart surgery just days before Meghan tied the knot with Harry.

That meant he wasn’t able to walk his daughter down the aisle at St. George’s Chapel at Windsor Castle.

Instead, Thomas watched the fairytale ceremony on a TV at the B&B he was staying at after being released from hospital.

He watched as Harry’s father, Prince Charles, walked Meghan down part of the aisle.

“Everybody was watching my daughter and I couldn’t have been more proud,” said Thomas. “And like I said, how could I ask for a better replacement than Charles? I just wish it could have been my hand holding my daughter’s not his but I think he was wonderful for doing it.”

Thomas also had words of praise for his ex-wife Doria Ragland, who was the only member of Meghan’s family to get an invite to the wedding.

“My ex-wife is a beautiful woman,” he said. “I thought she looked very good. I kind of wish she was sitting with someone, unfortunately I couldn’t be there but she did very well.”

He added: “We get along, we talk, we have always had a good relationship around our daughter and between the two of us. It shows in our child.”

Thomas also applauded Meghan’s decision not to invite any other family members; a decision that saw many of them, including half-sister Samantha, voice their disappointment publicly.

“It gets complicated,” admitted Thomas. “Basically some 40, 50, 60 Markles came out of the woodwork all asking for invitations to the wedding and Meghan probably had the good sense to invite none because she would have offended the others.”

Thomas also opened up about his decision to work with a photography agency on staged photos, admitting it was a huge mistake and he regretted it now.

He said both Meghan and Harry had been very forgiving when the news emerged shortly before their wedding.

Do you think there will be a royal baby soon? Leave us a comment on our Facebook page @EntertainmentDailyFix and let us know what you think!