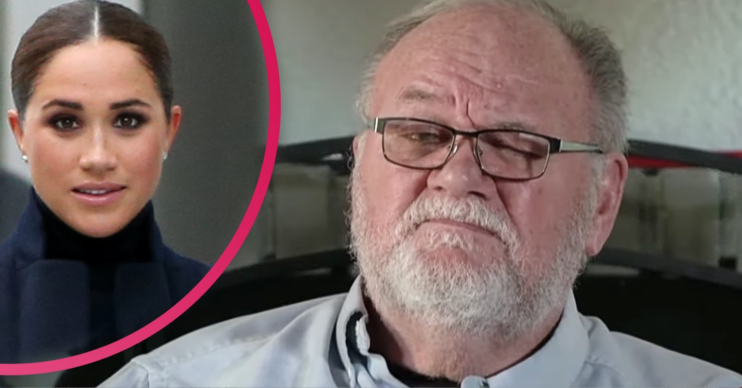 He also accused his daughter of "telling lies"

Thomas Markle has broken his silence on the apology his daughter – Meghan Markle – issued to the High Court.

Furthermore, the 77-year-old not only accused his daughter of lying during the ongoing saga of her biography, Finding Freedom, but also spoke about Prince Harry.

He claimed Harry was “maybe dropped on his head as a baby” in the fresh rant.

Why did Thomas Markle speak about his daughter Meghan?

Earlier this week, Meghan issued an apology to the High Court after “forgetting” that she asked senior aides to speak to the writers of the book.

She had previously stated that she had not contributed to the book, but her former press secretary Jason Knauf has said otherwise.

Speaking with Dan Woonton on GB News, Mr Markle said: “I can’t speak too much about this but I think she was trying to deceive.

“I think she was telling lies.

“Finally the truth is coming out and thank god for Jason Knauf.”

What did Thomas Markle say about Prince Harry?

He then commented on Prince Harry.

“You have to understand that the way I’m feeling right now… Harry and Meghan have harmed so many people.

Later in the interview, Mr Markle said: “I defer to Harry’s ignorance.

“I don’t know what happened to him, maybe he was dropped on his head as a baby or something but the bottom line is that everything that comes out of his mouth is always kind of stupid.”

What did Meghan say in the apology?

Meghan issued an apology to the court after she said she didn’t “remember” emails between her and Mr Knauf.

This happened despite the Duchess of Sussex previously saying she “did not collaborate with the authors on the book, nor were they interviewed for it”.

Read more: Meghan and Harry news: Meghan ‘feels obliged’ to keep up public persona – but Harry ‘sticks to his morals’

However, in her new witness statement, she accepted that Mr Knauf had briefed the authors.

“I apologise to the Court for the fact that I had not remembered these exchanges at the time,” the statement said.

“I had absolutely no wish or intention to mislead the Defendant or the Court.”