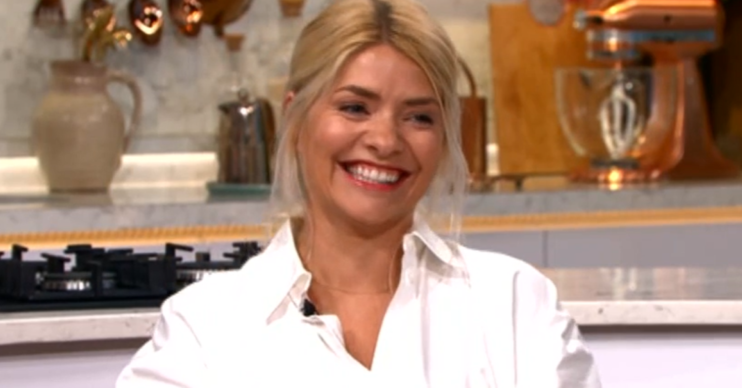 Holly Willoughby was left gushing over her three kids as she showcased their incredible artistic efforts.

The 39-year-old This Morning presenter took to Instagram Stories to show off an imaginative SpongeBob SquarePants model created by her kids.

The youngsters had cleverly drawn each character and even created an underwater backdrop.

Holly’s kids certainly aren’t the only ones to get a mention on her social media this week.

On Wednesday (August 19), the host admitted she was “in bits” as she watched her dad tick off one of his bucket list dreams.

Holly shared a video showing her dad Brian flying in a Spitfire, adding: “Well, I just received this footage from @boultbeeacademy of the moment my dad ticked the big one off his bucket list and flew in a Spitfire…

“I’m in bits here watching this.”

Could Holly Willoughby quit This Morning?

Meanwhile, it’s believed bosses at the ITV show are worried Holly may quit.

It comes after the busy mum apparently cut ties with the showbiz agency she once shared with her co-host Phillip Schofield.

According to reports, bosses fear Holly’s actions “may be the start of her branching out alone”.

A source told new! magazine: “There are whispers over at ITV that Holly’s actions may be the start of her branching out alone.

Read more: This Morning viewers heartbroken as woman tearfully reveals guilt over having her dog put down

“Bosses are worried about losing their dream team in Holly and Phil, who in their eyes are second only to Ant and Dec when it comes to on-screen pairings.

“Now Holly has made it clear she wants to control her own career, the bigwigs are worried about her quitting This Morning and are even considering offering her big money to stay, should it come to that.”

The lovable presenter replaced Ferne Britton on the daytime show back in 2009.