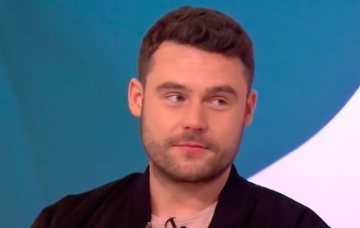 He made it very clear he wanted the star to go away!

There is a lot of love (and we do mean a lot) out there for Emmerdale star Danny Miller but even that didn’t stop him coming in for a bit of a telling off after he made a rude hand gesture on live TV!

Danny appeared on today’s episode of Loose Women, to talk about the aftermath of last night’s dramatic car crash.

So when the show was trailed, live, by Eamonn and Ruth on This Morning, Danny was there, sitting with Andrea McLean, Stacey Solomon, Linda Robson and Kaye Adams.

As Stacey talked about Danny appearing on the show, Keith Lemon popped up in front of the camera.

But Danny obviously wasn’t impressed by Keith’s cheeky behaviour. He reached up so his hand was visible over Keith’s head, clenched his fist and made a VERY rude gesture to the cameras. Oh, Danny!

It wasn’t hard to see what Danny was up to, so unsurprisingly, social media was immediately filled with comments.

Viewers couldn’t believe their eyes, with one fan writing: “What did Danny Miller just do?”

Another joked: “Naughty Danny Miller” while another added: “Love it!”

But not everyone was impressed. Lots of viewers tweeted the official This Morning account to complain that Danny’s gesture was “not appropriate”.

Well, now Danny has FINALLY cleared everything up.

Taking to Twitter, the bemused soap star said the whole thing had been scripted and his hand gesture was a signal for Keith to get away from the cameras.

Danny tweeted: “Ha! FINALLY get why people think I was being rude this morning. THAT [gesture] was ‘get off the stage Keith’ & you’ll find THAT was part of the script & the show. THAT was the idea of Keith being on the show. Popping up everywhere? Wow people! I love [Keith Lemon] so chill.”

And not finished there, he went on to reply to some tweets sent his way.

He told one fellow Twitter user: “I wouldn’t do that on daytime television? Celeb juice yeah. But I was told to joke around and clear him off the stage. If the shot was tight enough you’d see my thumb pointing him to the stage exit to my right.”

Danny then added: “Watched it back and I got the mix up but I wouldn’t do that, mate. Ha! My Mum watches that show. I just wouldn’t. But I can understand the confusion.”

Glad that’s all been cleared up!