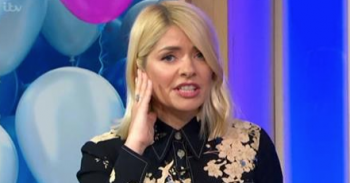 The show was slammed for its actions...

This Morning has been slammed by angry viewers who say they were ‘tricked’ into thinking the Queen had died.

On Thursday (7 March), Holly was seen looking fretful before she announced that the show had to be interrupted for an urgent news bulletin.

As she and Dr Ranj Singh were about to announce whether three couples were welcoming a little boy or girl into the world, Holly said: “I’m really sorry to interrupt right now, but I’m going to have to stop you because I’ve just heard there’s some breaking news.”

She continued: “We need to cross now to Nina Hossain who is in the ITN news room for more details.”

Viewers who had been watching the parenting segment immediately thought the worst about the news bulletin, and feared something terrible had happened – including the death of the Queen.

In fact, it was a hoax and newsreader Nina was purely there to announce what gender the couples were expecting.

While some fans of the show saw the funny side, some did not – and criticised the show for being “irresponsible”.

One viewer wrote: “Well done to whoever arranged the fake breaking news. We’ve had multiple stabbings in recent days, bombs sent to airports and stations… But hey, let’s [bleep] everyone up because some couple are having twins. Have a word with yourself.”

Another agreed, replying: “Exactly. Totally irresponsible. Those with heart conditions or have anxiety must have been affected too. My mum is now a nervous wreck as she thought the Queen had died. #CruelJoke.”

A third added: “OMG #thismorning! #Breakingnews I thought the Queen had died!”

“Who came up with the stupid Breaking News idea?” asked one. “Most people probably thought it was a terrorist attack or the Queen had died. #ThisMorning #BreakingNews.”

@thismorning who came up with the stupid Breaking News idea? Most people probably thought it was a terrorist attack or the Queen had died. #ThisMorning #BreakingNews

Omg @thismorning ! #breakingnews I thought the queen has died !

Genuinely thought the Queen had died or something then wtf #ThisMorning

Really thought the Queen had died or the country was under attack. How utterly ridiculous #ThisMorning

This morning just faked a breaking news as part of a gender reveal. Literally everyone watching immediately thought the queen died.

Yet another seethed: “Really thought the Queen had died or the country was under attack. How utterly ridiculous. #ThisMorning.”

Holly hosted by herself this morning, as her co-star Phillip Schofield was ill.

Do you think it was just a bit of fun or totally irresponsible? Leave us a comment on our Facebook page @EntertainmentDailyFix and let us know what you think!