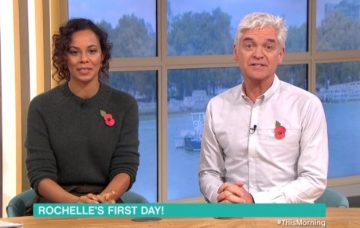 She made her presenting debut alongside Phillip Schofield

Rochelle Humes made her debut as Holly Willoughby’s replacement on Monday’s episode of This Morning.

The former Saturdays singer and Ninja Warrior UK presenter will join Phillip Schofield on This Morning while Holly is over in Australia for I’m A Celebrity… Get Me Out Of Here!

As the show began, Rochelle revealed Phil had played a joke on her seconds before they went on air.

A laughing Phillip then explained: “The music came on and I said, ‘Right, you feeling okay?’ She said yes and I said, ‘Okay, good luck’ [and walked off set].”

Rochelle agreed: “I was like, come back, don’t leave me!”

She then told Phillip: “I’m okay. When you’re at home and the kids have gone to school, you’re doing the breakfast, the This Morning theme song is just what you want to hear. But when you’re here it’s a terrifying sound, isn’t it?”

Phil assured her: “It will wear off, it’s fine!”

He added: “Welcome. We’ll have fun and it’s nice to have you here.”

Viewers were quick to take to Twitter to share their verdict on Rochelle, who will cover for Holly for the next month while Holly is filming I’m A Celebrity.

Plenty loved the new partnership of Rochelle and Phil, saying they liked Rochelle’s presenting style and chemistry with Phillip.

Others said everyone should wait a few days to deliver a true verdict, suggesting Rochelle, 29, would understandably be nervous on her first day on such an iconic show.

I like Rochelle on #thismorning, doesn’t make everything all about herself!

Well done @RochelleHumes on your first @thismorning show, you seem right at home, and you can see you and @Schofe have a good connection #ThisMorning

Will people give poor @RochelleHumes a bloody chance. First day nerves may have played a part in today. I personally think she did well!! #ThisMorning

Other viewers, however, were quick to voice their uncertainty about Rochelle taking on Holly’s role, saying they “couldn’t warm” to her yet and missed Holly.

40 minutes in and I’m already irritated by Rochelle (@RochelleHumes) who’s started every sentence with “yes…” and ended each segment with inane laughter. This isn’t her first rodeo so whyyyy is she suddenly so bad at this? #thismorning

Off for half term and watching #ThisMorning and just confused as to why they couldn’t get a better replacement for holly over the next few months? Can’t be the only one who just doesn’t think Rochelle is good enough for the main presenter role?

Other viewers spoke out to suggest other possible presenters they felt would have been a good choice besides Rochelle.

I'd rather have Gok than Rochelle #thismorning

#ThisMorning think Sarah Greene would have been a better option than Rochelle. @thismorning never listens to what viewers want though

Rochelle is no stranger to This Morning as she often presents the fashion slot and has stepped in as a guest presenter while Holly and Phil are on holiday.

Holly, meanwhile, celebrated her last day at This Morning earlier this month.

She and Phillip had last week off for half-term and while Phil returned to the sofa alongside Rochelle on Monday, Holly is packing her bags and getting ready to fly to Australia.

The 37-year-old has been enlisted to cover for Ant McPartlin on this year’s show, after Ant decided to take time out from work commitments to focus on his well-being.

Did you enjoy Rochelle and Phillip’s partnership on This Morning? Leave us a comment on our Facebook page @EntertainmentDailyFix and let us know what you think!