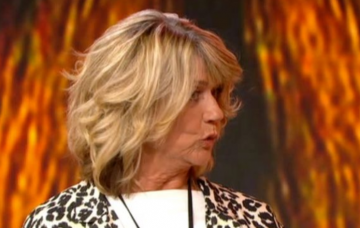 Well this was super awkward

It was red faces all round on Thursday’s This Morning, as a model refused to reveal her age – just as it flashed up on screens around the country.

Beautiful Felicity, who is (sorry Felicity) 67 years young, was on the show as part of Trinny Woodall’s fashion segment.

Presenters, Eamonn Holmes and Ruth Langsford – who are covering regular hosts Holly Willoughby and Phil Schofield during the summer holidays – were blown away by the leopard print outfit.

Ruth said to Felicity: “It’s a really modern look. Do you mind if we say how old you are?”

The model said “yes” and laughed.

Eamonn tried to convince her, saying: “You do look great. I looked down and thought it was a misprint here. You should tell people because they won’t believe it anyway.”

Trinny tried to end the conversation by telling the TV stars that Felicity was “over-50” but unfortunately for all concerned, producers had already told the world.

They ran a banner on the screen under the senior model, saying: “Felicity, 67, Retired”.

Fans at home were amused, tweeting: “#thismorning flashing Felicity’s age up on screen then making a big deal out of not revealing it 😂😂 #67”.

Another wrote: “@thismorning poor Felicity, It showed aged 67 up on screen lol!”

A third added: “@thismorning loving the bit on animal print but you said you wouldn’t say Felicity’s age but it was splashed all over the screen…massive faux pas ???”

It’s been a week jam-packed with controversy on This Morning.

Mostly thanks to Eamonn’s glasses.

During a heated segment about an ambulance driver who got a parking ticket while on duty, viewers watching from home got hot and bothered over his new eyewear.

One person tweeted: “Eamonn acting like a bad man with his glasses giving the man a good telling off.”

Another said: “Eamonn your glasses are terrible.”

Meanwhile, earlier this week Eamonn caused a stir with his choice of outfit for the daytime show.

The 58-year-old opted for a crisp white suit with a light blue shirt and a pair of white boat shoes.

But some viewers weren’t keen on the look with some saying he looked like he was going to a wedding.

Others said he looked like The Man from Del Monte!

We do love an on-air blunder. Let’s hope Felicity forgives you, This Morning.

This Morning airs weekdays from 10.30am on ITV

Would you tell people your age? Leave us a comment on our Facebook page @EntertainmentDailyFix and let us know what you think.