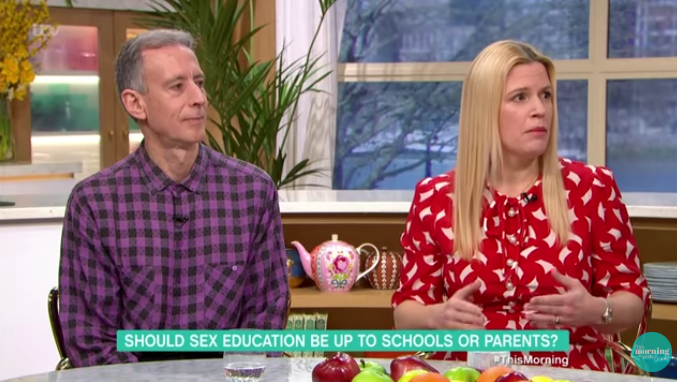 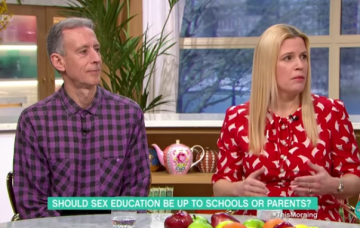 A fiery debate on This Morning about teaching sex education in schools sparked a row on Twitter today.

Farrow disagreed with plans to introduce it to kids as young as five, calling it “abusive”. She also enraged viewers with her remarks on seeing same-sex couples kissing.

“Some people don’t like the idea of two men kissing and that doesn’t mean they’re homophobic or that they hate gay people,” she said.

Her comments soon sparked a flurry of responses from gobsmacked viewers.

“Did This Morning hop back to 1940 to find this woman because she surely can’t be in 2019 chatting this [bleep],” one wrote.

A second commented: “Sex Ed abusive? Is this woman for real. They’re taught about their body, their feelings, protection it’s not an instruction manual on how to do it.”

#thismorning #Carolinefarrow should realise that her expressed views are #homophobic and ask herself why it’s acceptable to reject a same sex couple kissing? The change should come completely from the people having the problem. #hetronormaty

A third viewer tweeted the show to say: “@thismorning As a trans person I’m appalled by this lady. ‘It’s not homophobic to dislike gay people’. Hun that’s the definition of homophobic.”

After receiving a backlash following her appearance on the show, the journalist took to Twitter to defend her opinion.

“Whether or not you like a same-sex couple kissing has become today’s litmus test of morality,” she wrote. “It’s fine to find this a turn off. Stop trying to control other people’s thoughts, feelings and boundaries.”

She also responded to a This Morning viewer who said they found her comments “disgusting”.

“Absolutely disgusted to hear what you said on #ThisMorning – the levels of ‘discomfort’ should be altered not the equal education. #homophobia #lgbt,” they tweeted her following the ITV show.

@thismorning As a trans person I’m appalled by this lady. “It’s not homophobic to dislike gay people”. Hun that’s the definition of homophobic

Sex Ed abusive? Is this woman for real. They’re taught about their body, their feelings, protection it’s not an instruction manual on how to do it 🤦🏻‍♀️ #ThisMorning

Caroline replied that “it’s fine for people to have their personal boundaries.”

“Not when it’s homophobic it’s not,” the Twitter user fired back.

Caroline said: “It’s not ‘homophobic’ to find people of the same sex kissing a turn-off in the same way it’s not heterophobic to find mixed sex couples kissing a turn-off. Why should anyone be forced to feel something they don’t.”

@thismorning we live in a diverse society. There are children attending school with the same sex parents, if a child is aware that this is a normal living family relationship then there is no stigma and reduced risk of the child feeling different and why should they be.

“The aim of these lessons is pure. It’s to look after the sexual, mental and emotional health of young people,” he told Eamonn and Ruth.

“We want to cut the levels of teenage pregnancies and abortions, reduce the levels of sexual infection, stop abusive relationships. That’s what these lessons are all about.”