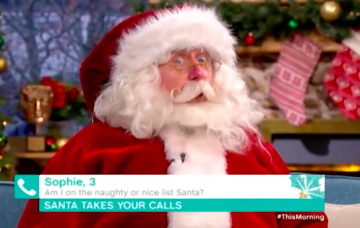 This Morning Santa branded “creepy” and “scary” by viewers

Some even said he was "the worst ever"

When Father Christmas appeared on This Morning, it was more a case of ‘no, no, no’ than ‘ho, ho, ho’.

Santa impersonator Chris Cringle appeared on the show today (Thursday 20 December) to chat to Eamonn Holmes and Ruth Langsford – but, rather than warm to the bearded gift-giver, viewers branded him as “scary” and “creepy”.

As the Father Christmas lookalike did a phone in with hopeful little boys and girls, parents took to Twitter to criticise him.

For example, this viewer who tweeted: “Now I understand why kids cry when they go see Santa. He’s creepy af #ThisMorning.”

Another agreed, saying: “Sounded a bit creepy there Santa ‘I’ll find you’ #thismorning.”

A third added: “Why’s there a creepy Santa on? He’s like bloody Krampus #thismorning.”

Sounded a bit creepy there Santa "I'll find you" #Thismorning

This Santa on #thismorning is so bloody creepy!

Others called the FC “[bleeping] terrifying”, “pervy”, “bonkers” and “the worst ever”.

One bemused fan even claimed to have “sent my dogs out of the room” because of the scary Santa.

Earlier in the segment, the impostor had stated it was four more sleeps to Christmas Day, when in fact there were five, as well as making a couple of comments about being able to “find” the children, even if they moved house.

But don’t worry folks, he wasn’t the real Santa! The real Santa is beavering away in the North Pole and not at all scary (even though he does creep into our houses under the cover of darkness!).

Did you find This Morning’s Santa creepy? Leave us a comment on our Facebook page @EntertainmentDailyFix and let us know what you think!