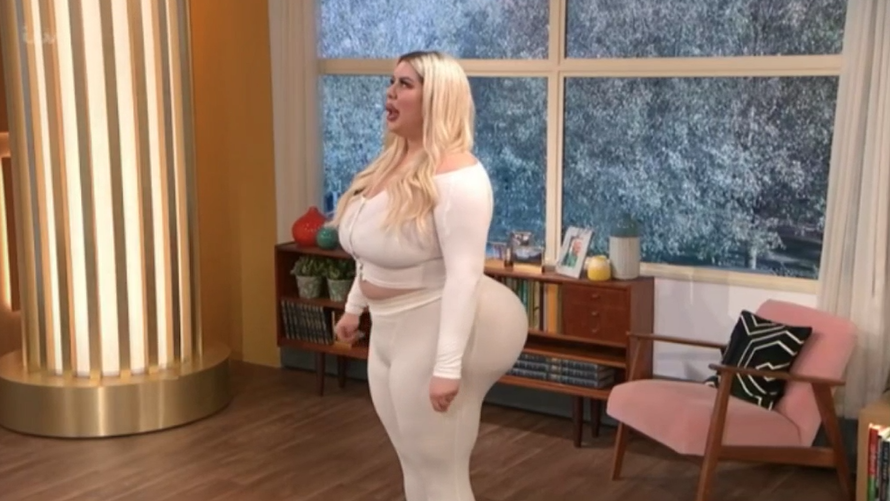 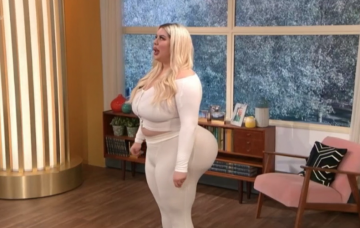 This Morning viewers were left gobsmacked by a woman whose goal is to have the world’s biggest bum.

On Wednesday’s show, Holly Willoughby and Phillip Schofield met Natasha Crown, who has undergone three bum lifts and indulges in chocolate sundaes and chocolate spread in a bid to make her bottom the biggest in the world.

Swedish model Natasha said her bottom is currently around 83/84 inches wide and her dream is to break the world record and get her bottom to 90 inches.

Read more: This Morning guest compares breastfeeding in a pool to urinating in street

Natasha explained she started exercising and her bottom was growing naturally until it got to a point where it stopped getting bigger.

That’s when she thought about undergoing surgery to continue her dream of having a bigger bum.

She said: “If you want to have a bigger bum, surgery is the next step.”

Natasha said she has a “pre-surgery diet” in which she gains around 20-25 kilos of extra fat two months before undergoing the surgery. The fat is then transferred from her body into her bottom.

She said: “I eat everything. Foods with a lot of carbs – pizza, pasta, hamburgers, Nutella.”

Natasha said after the procedure, she goes back to a healthy diet.

When asked why she wants to have a bigger bum, Natasha said: “That’s a good question. I have a goal to have the world’s biggest bum.

“At the beginning it wasn’t about that, it was just about having a bigger bum.”

Natasha said she received so much encouragement from people on social media, that she went ahead and made it her goal to achieve the world’s biggest rear.

Phil brought up the fact that multiple women have died from having the surgery, including a British woman who passed away last week while she was having a bum lift.

When asked if she’s worried about the implications of the procedure, Natasha said: “No, she had bad luck I think.”

Natasha also said she’s doing the procedure at her “own risk” and her “own choice”.

On how having a big bum effects her day-to-day life, Natasha said she can’t run or sleep on her back and has to have two seats on a plane.

Natasha – who has 80,000 Instagram followers – said with her next bum lift, which will be her fourth, she hopes her bottom will reach 90 inches.

When asked if she’s bothered about the “haters”, Natasha insisted: “No! I’m just smiling.”

Natasha added that her family are “really concerned” and think she’s going to die because she’s gaining so much weight and having the surgeries.

Viewers watching from home also expressed their concern for Natasha.

Others admired Natasha for her confidence.

Plastic surgeon spokesman Gerald Lamb has said: “The Brazilian Bum Lift has the highest death rate of all procedures due to the risk of injecting fat into the large veins in the buttocks that can travel to the heart and brain and cause severe illness and death.”

What is your opinion on cosmetic surgery? Leave us a comment on our Facebook page @EntertainmentDailyFix and let us know!