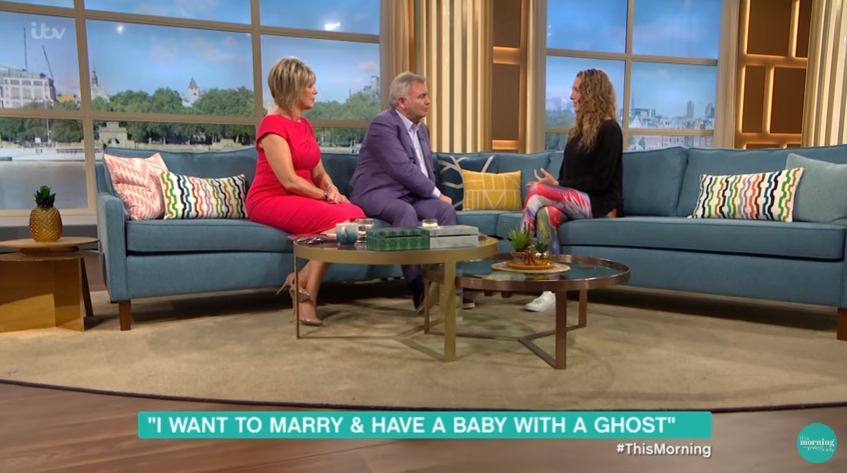 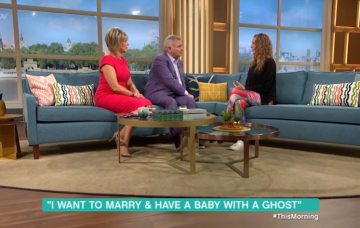 This Morning guest trying to get pregnant by GHOST lover

Earlier this year, This Morning guest Amethyst Realm had Twitter in meltdown as she discussed her orgasms with GHOST lovers.

She proved such a hit with baffled viewers that Eamonn Holmes and Ruth Langsford invited her back onto today’s show.

And the presenters’ faces were a picture as she explained the phantomenal sex she was having with a ghoul she met Down Under… who followed her back to the UK.

“When I was in Australia taking a walk out in the bush, just suddenly it approached me. Just something you feel, an emotional physical presence,” she explained.

“I fell in love with it I guess. It’s the one. He’s very ancient, very wise, very kind.”

They even had sex on the plane home, joining the mile high club… although why they needed the privacy of the toilet was anyone’s guess, Ruth’s included.

“We wouldn’t be able to get into it in the seats,” Amethyst responded.

Spiritual guidance counsellour Amethyst has been seeing her ghost for six months and wants to settle down and start a family with him. Her bemused interviewers asked whether it would be a physical baby…

“The reason we don’t carry them to full term is the people who have them don’t comprehend it or think it’s possible.

“I hope through understanding my body I will be able to. I don’t know what it will turn out like. Whether it would be in human form or spirit form – I don’t know.”

Eamonn asked if feeling the presence of her ghost is like being possessed.

“It’s my relationship, it’s personal, I don’t mind so much if people don’t get it.”

She is hoping to get a hand-fasting ceremony soon – “it’s like a spiritual marriage ceremony”.

Amethyst Realm, 30, from Bristol, turned her back on men more than a decade ago in favour of ghosts. It puts the willies up us just thinking about it.

Have you had any intimate ghostly encounters? Leave us a comment on our Facebook page @EntertainmentDailyFix and let us know.