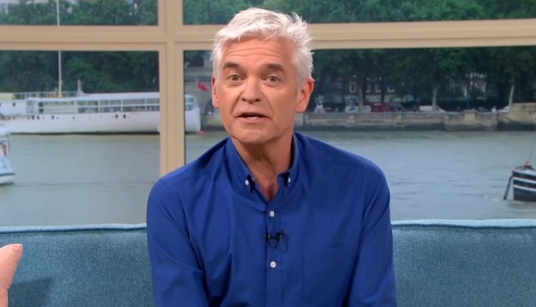 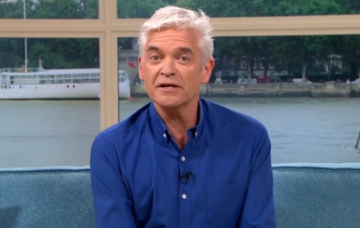 The This Morning studio was given a shake up today when Big Brother star Andy West ended up kicking Phillip Schofield and Rochelle Humes’ chairs during a debate.

Andy had been invited on the show to discuss whether children should be allowed in pubs and he made sure he got his point across to the presenters!

Arguing his view, following his tweet that children have “no place in pubs”,  the BB star explained: “Maybe you’re there to tell dirty jokes, talk about your sex life, swear or be a grown-up and do the things grown-ups are allowed to do, then you get to these situations and kids are screaming!”

The 36-year-old reality star and journalist then jumped up to make his point physically too!

He began kicking Rochelle and Phil’s chairs and asked: “Is this annoying?” Before jokingly adding, “How is your romantic meal now?”

He then proceeded to run around the studio and jump over the furniture like a toddler to really hammer things home, leaving Rochelle, 29, and Phil, 56, rather bemused.

Phil then admitted that Andy’s unusual approach was “a very thorough point well made”.

Andy, who came fourth on Big Brother two years ago, later apologised to This Morning and their sofa!

Thanks for having me on @thismorning! Sorry for jumping on your sofa @Schofe but a point had to be made. If It’s not okay on the This Morning set it’s not okay in my local! 😏 pic.twitter.com/VQZkghysNG

Some viewers saw the funny side of Andy’s antics in the studio.

Can we all go find the pub that Andy West goes to and take our kids to run riot?? #ThisMorning

Meanwhile, others voiced their disagreement about his views…

🤣🤣shock this guy doesn’t have kids. Come back on this opinion in 10 years Andy West 🙄#ThisMorning

Andy West clearly hasn’t got kids on #ThisMorning Shut Up!

What are your thoughts on the debate? Leave us a comment on our Facebook page @EntertainmentDailyFix and let us know what you think of this story.