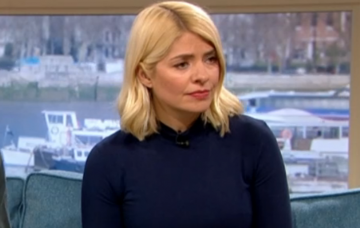 Holly Willoughby’s latest outfit for This Morning has divided her fans.

Holly, who hosts the show alongside Phillip Schofield, completed the chic look with a pair of white boots from Office.

However, some fans have said they don’t think the boots go well with the “gorgeous” outfit.

One person said: “Stunner, but the boots are not my fave!!!” while another wrote: “Love the outfit, hate the boots.”

Others couldn’t get enough of the look, with one person gushing: “I love this outfit!”

Another said: “Loving the colours Holly but I’m so admiring your pins,” while a third added: “Wow, looking gorgeous.”

It comes after Holly faced some backlash over her outfit for Sunday evening’s Dancing On Ice.

The star wore a stunning black Versace gown and was reminiscent of actress Liz Hurley’s infamous safety pin gown in the nineties.

Cut low across the bust, it brought the presenter’s famous ‘Willoughboobies’ into focus.

A super-high split offered a flash of her toned and tanned legs.

But some viewers said the dress was just too distracting for a family show, with one person writing on Twitter: “It’s a family show, Holly put some clothes on #DancingOnIce.”

Another said: “Is anybody else having difficulty concentrating on the Ice Dancing tonight. Keep looking at Holly Willoughbys boobs.”

A third added: “Love dancing on ice, but really didn’t ask for a side order of Holly’s [bleep] in high definition! It’s 6pm!”

The star has recently returned home from a skiing trip with her husband Dan Baldwin and three children – Harry, nine, Belle, seven, and four-year-old Chester.

What did you think Holly’s outfit for This Morning? Leave us a comment on our Facebook page @EntertainmentDailyFix and let us know what you think.