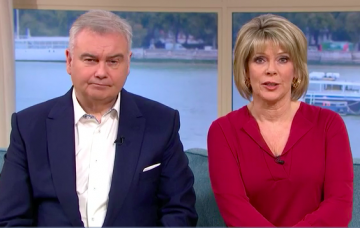 The journalist opened up about her own mental health issues

This Morning has ignited an online debate after a guest warned about the dangers of antidepressants.

Appearing on Friday’s episode, Sarah Vine – journalist and wife of politician Michael Gove – opened up about her struggle with depression and anxiety.

Speaking to presenters Eamonn Holmes and Ruth Langsford, and sitting alongside Dr Zoe, the Daily Mail columnist revealed the side effects she suffered with after starting medication.

Sarah said: “I tried to get off my antidepressants and I had the most horrific side effects and went completely mad, it was awful. I couldn’t do it. And every time I tried, I had to start taking them again.”

She added that when she wrote about the subject in an article, “We had so many letters from readers saying the same thing.

“The thing about anti-depressants is they are brilliant when you need them, definitely, and I think people should go and see your GP if you need help – get it! But the way they work is, they take the pain away, but they also make the happiness go away, they take away your emotions on several levels.

“You can end up feeling like you’re dead inside, which is what happened to me.”

She went on to explain how she’d ended up taking them, saying: “In my case I’d had anxiety all my life and I even had postnatal depression with my son, my second child, and I never took them. I was offered them and I always thought I could do this on my own.”

But she eventually realised she needed more help, saying: “I couldn’t do anything. Even posting a letter was a massive, huge job.”

Dr Zoe chipped in to add: “Antidepressants can be the right thing but they’re not for everyone – it’s very important to be informed.

“You can have some side effects when you come off them.”

She’s now switched medications and said she feels better than before, but is still hoping to come off altogether in the future.

The segment was to promote awareness of the fact that seven million people in England alone are on anti-depressants to help with their depression and anxiety.

Fans were divided by her comments. Many rushed to show support, with one tweeting: “Sarah Vine, Mrs Gove, you go lady! Thanks for your talk on this morning.”

Another agreed with the warnings, writing: “Anti depressants are good in measures but the side effects are problematic and there are many other ways to combat anxiety and depression now. #thismorning”.

A third revealed they’d had a similar experience commenting: “Took escilatipram for months but they were doing nothing, stopped taking them and had horrible side effects, felt like my head was buzzing when ever I moved, this alone drove me back into depression and heightened my anxiety #thismorning”.

Others expressed different views, with one tweeting: “@thismorning hope Sarah vine does not frighten desperate people who need anti depressants they actually save lives”.